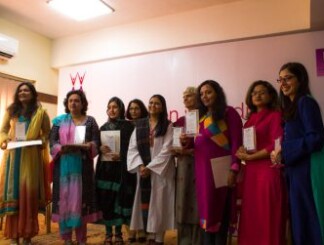 KARACHI: Women journalists were awarded at the country’s first women in media awards ceremony organised by Uks, a research, resource and publication centre on women and media, on Wednesday.

“It is great to see women journalists getting recognition through the Uks platform, but while celebrating today’s media women we should also remember the pioneers such as Razia Bhatti, Najma Babar and Rehana Hakim who defied policies and worked under strict censorship, said Zohra Yusuf, chairperson, human rights commission of Pakistan. She also recalled services of noted press gallery writer, Anis Mirza, and others like Maisoon Hussain, Amenea Azam Ali, Saneeya, Najma Sadeque and others.

Former Dawn assistant editor Zubeida Mustafa, recipient of Uks’ life-time achievement award, also thanked Ms Yusuf for reminding the gathering about the old women journalists who through their hard work paved the way for the media women of today. “They are the foundation which you may not be able to see now like the foundation of a building, but it is only a strong foundation on which you can build walls, etc,” she pointed out.

Social analyst Nazish Brohi, who was also part of the Uks media advisory group and panel of judges, appreciated the research and resource centre’s initiative of empowering women in the media.

The women in media contest had invited entries in English, Urdu and regional languages of the country from print, radio, television and social media about the struggles of women.

The first prize in the print category went to Razeshta Sethna on her feature ‘Signed, sealed and delivered’ published in the monthly Herald.

The runner-up in the same category was Imrana Komal, a reporter with Daily Express, Multan, who did a feature on acid throwing in Pakistan.

In the radio category, the winner was Afifa Habib of Pakistan Broadcasting Corporation (PBC), Bahawalpur, for her talk show on women and media. ’

The runner-up in the same category was Shamim Anjum of the PBC headquarters in Islamabad for her feature on Malala Yousufzai.

In the television category, Shamim Ara Marwat of Kyber News, Islamabad, won the prize on her story ‘Survival of women in refugee camps of Orakzai Agency’.

The runner-up in the same category was Maimoona Saeed, a reporter with Geo, Multan, on her story about women cotton pickers.

In the online category, the prize went to Sadia Sahar Haideri for her feature published in community.ejc.net.

The awards were given away by Masood Hamid of the All Pakistan Newspapers Society and Zohra Yusuf.

The ceremony also saw the launching of Powerful Women, Powerful Nation: Empowering Women Through the Media, a first-ever media guide designed as a resource tool for media professionals to help them change the stereotypical reporting usually seen as the norm in Pakistan.

Hammad Siddiqui of CIPE, an NGO based in Washington DC, that has collaborated in bringing out the media guide, said he was happy to see the community of women journalists growing.

Earlier, the director of Uks spoke of her own struggle in launching the NGO in 1997. “We were concerned about the way crimes against women were being reported in the press. It was our aim to empower women in the media through the media. If there were more women on the desk in media houses maybe such decisions would be handled more sensitively,” she said. “As a pressure group we fight for women to be given positions at par with men in media houses.”