We will continue to give ‘Junoon’ from music: Ali Azmat, Salman Ahmed | Pakistan Press Foundation (PPF)

We will continue to give ‘Junoon’ from music: Ali Azmat, Salman Ahmed

The ‘Junoon’ band with millions of admirers is going to rock the nation and perform once again as a group. Talking in the Geo News’ programme “Aaj Shahzeb Khanzada Ke Sath,” renowned singer Ali Azmat and guitarist Salman Ahmed, said they are back together and would now compose wonderful music, produce new albums and continue to inspire “Junoon” among the people. Guitarist Brain is also back with Salman and Ali Azmat and would perform with them, but could not make the appearance on the programme due to sickness. The band’s lead singer Ali Azmat said after Karachi, another musical show is lined up in Dubai and they have planned to co produce several albums. About the past experience of working together, Azmat said he had no differences with the others. He said he wanted to do some solo albums and to be recognised as a musician. Azmat said it was a tough struggle and he wanted to test himself in lyrics, writing and production and leave his mark.

Azmat said the music remains much the same but the interests of the audience have changed. Previously people used to watch the whole song now they are pressed for time and the interests have changed. He said once the musicians were stars, but now the spot light has shifted to the anchors. The singer said we did not earn so much money in our lifetime as the anchors do now.

Salman said he wanted to provide good education to the children and needed to devote time to the family. He said the children have now grown up and help us out in the rehearsals. Salman said his wife sang a song with Ali Azmat in the “Azadi” album.

Salman recalled that the “Jaunoon” got the award for the best ‘Band of South Asia’. He said we are proud to have sung the theme song of Jinnah, the movie on Quaid-e-Azam. He said the band is a teamwork and everyone has the right to move ahead in their lives and it was not strange if Ali Azmat wanted to do solo work. Salman said improvements come with age and the same is true for art. He said they introduced a number of new trends in the sub-continental music. The guitarist said he is not too pushed to trail the trend, but attempts to follow his own passion. He said after uniting and coming together we would produce better music and entertain the people. Way back, the people did not like the style of Junoon, but then the band became the most favourite of all. Salman said the people would continue to listen and admire their songs and music for long even after they have gone. Talking of his friendship with late Junaid Jamshed, Salman said he was his inspiration and left a huge impression on his life. Salman said people would often ask us if the three of us could ever perform again. The moment has come, Salman said that we going to perform together, once again. 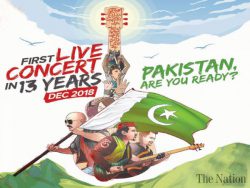