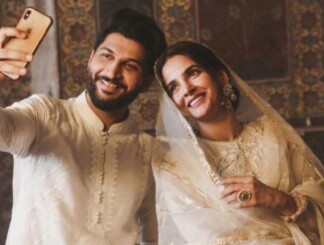 LAHORE: The manager of the city’s Wazir Khan Mosque has been suspended, a notification from the Punjab Auqaf and Religious Affairs Department said on Sunday, in what comes as the latest update in the controversy surrounding a short video shot at the glorious historical site.

According to the notification, the Punjab Auqaf and Religious Affairs Department has suspended Ishtiaq Ahmed, a mere day after social media erupted in anger over singer Bilal Saeed and actress Saba Qamar shooting a music video inside the mosque premises.

The department’s deputy director of finance has been assigned to lead a probe into who allowed the shooting to be carried out inside the mosque and where the mosque’s administration was when the shoot took place.

Protests have erupted across Lahore, with people demanding action and punishment against the stars. The company behind the music video shooting, on the other hand, said it had requested prior permission, which was granted against payment of Rs30,000.

Ahmed, the manager, told Geo News that no dance actually took place inside the mosque but that the video on social media was the wonder of post-shoot editing. Meanwhile, speaking to Geo News, Punjab Auqaf minister Sahibzada Saeedul Hassan said the video shoot raised a lot of questions.

He also vowed strict action against those who gave the permission “no matter how high a position they held”. Earlier, Qamar and Saeed had faced severe criticism on social media, with many calling for harsh punishments for both for disrespecting a religious site. So much so that #SabaQamar became the top hashtag trend on Twitter as the brief clip from the song went viral.

The actress had, however, responded to the criticism in a series of tweets, saying the clip was a “prologue to the music video featuring a Nikah scene”. “It was neither shot with any sort of playback music nor has it been edited to the music track,” she said on Twitter. Saeed also uploaded a lengthy apology on his Instagram account, saying both he and Qamar “realise what has happened over the past few days has hurt your sentiments deeply”.