Water, water everywhere, not a drop to drink 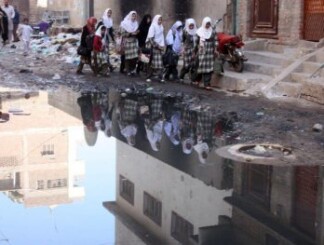 KARACHI/HYDERABAD: The roads in Hyderabad, a city that often resembles an island because it is bordered by the Indus River and three canals, saw a sudden rise in the movement of water tankers during the last few days. This vehicular supply, which indicates a shortage of piped water, was instantly followed by the December 25 annual 16-day canals’ closure for maintenance during which supply to water filtration plants is significantly reduced.

On December 22, the Water and Sanitation Agency (Wasa) informed its consumers about the impending situation and requested them to use water sparingly all the while assuring that it had sufficient water in its storage ponds.

But almost all parts of Hyderabad began reporting water shortages by December 26 and residents were left at the mercy of the water tankers, which allegedly operate in connivance with Wasa officials. This perceptible collusion reflects one of several practices which amount to non-compliance with and even defiance of the Supreme Court’s (SC) judicial commission on water and sanitation.

Creation of the commission

Probably for the first time in the country’s history, the superior judiciary opted to conduct province-wide inspections to verify whether or not the government could provide basic amenities like clean drinking water, sanitation and a healthy environment.

The troubles for the Sindh government started in 2016, when the SC took up a constitutional petition seeking direction for the provincial authorities concerned to ensure provision of potable drinking water, improved sanitation and pollution-free environment to the residents across Sindh.

The plea was filed by Advocate Shahab Usto, who had questioned the performance of the North Sindh Urban Services Corporation set up by the Sindh government to carry out development works in northern parts of the province with a $500 million loan from the Asian Development Bank.

Widening the scope of the proceedings, the apex court’s three-member bench, headed by Justice Amir Hani Muslim, had set up a judicial commission to inspect to development schemes meant to supply clean drinking water, improve worsening sanitation conditions and protect the environment.

The inquiry commission, headed by Justice Muhammad Iqbal Kalhoro of the Sindh High Court, was also mandated to investigate the failure of the authorities concerned in providing these facilities to the residents of the province.

During visits to different cities, Justice Kalhoro found that freshwater sources such as rivers and canals were getting polluted with dumping of toxic and poisonous industrial and domestic waste without treatment. He also found that almost all the water filtration and sewage treatment plants were not functioning as the authorities had failed to rehabilitate them.

It found that almost all the water supply and sanitation schemes initiated by the provincial government were not completed due to corrupt practices, mismanagement and negligence.

It also found that up to 90% of the residents in Karachi were being supplied water not fit for human consumption, as it contained bacteria and even human waste.

Another startling fact that came to light during the course of the commission’s investigations was that 90% of water supplied to Karachi was unfit for human consumption due to the presence of bacterial contamination. These revelations were made in a report on water analysis conducted by the Pakistan Council of Research in Water Resources, which was submitted to the commission. It stated, based on laboratory samples collected from across the province, that

The report concluded that out of the total 118 samples, 104 or 88.1% were found unsafe for human consumption due to presence of total coliforms beyond the World Health Organisation (WHO) recommended value of zero per 100 millilitres of colony forming units (cfu) for safe drinking water. Faecal contamination was detected in 40 samples and the E coli colony count was found to be within the range of one to too numerous to count, exceeding the WHO limit of zero per 100ml cfu for safe drinking water.

“Overall data shows that out of total 118 samples, 107 (90.7%) were found unsafe for human consumption while only 11 samples (9.3%) were found fit for human consumption for analysed parameters under the prescribed standards,” the report concluded. “The main reason for the unsafe results is supply of raw [untreated] water with filtered water, improper chlorination, mixing of sewage water and water supply lines/sources, silting of pumping stations/water storage tanks,” it added.

Almost all the 237 water supply schemes in Sindh, an overwhelming number of which were not provided electric supply, have been energised. The provincial government felt compelled to double the water and sanitation budget to Rs11.7 billion for the 2017-18 fiscal year.

However, despite all the year-long judicial orders, the objectives of supplying clean drinking water, addressing the artificial water shortage, stopping pollution of waterways and ending dumping and burning of solid municipal, industrial and hospital waste in the open seem unaccomplished. Some officials and the petitioner, advocate Usto, who spoke to The Express Tribune, attributed this to a lack of punitive action against the officials concerned by the commission.

According to him, two of the three industrial zones in his region, Hyderabad and Nooriabad site areas, still remain without an effluent treatment plant and release toxic waste in waterways. Only Kotri site area, where a combined effluent treatment plant was built after the SHC’s 2012 order, began treating industrial sewage over three months ago, he added. Municipal sewage is also released in the canals and the river. The commission had ordered action to stop pollution of the canals in Hyderabad and Jamshoro multiple times but to no avail.

“Only four hospitals in the region have installed incinerators but the others are still disposing of the waste in the open,” he lamented. There are hundreds of hospitals, health centres and blood laboratories in the nine districts of Hyderabad division. This is yet another violation of the commission’s orders.

An official of the Sindh Solid Waste Management Board (SSWMB) told The Express Tribune on the basis of anonymity that two landfill sites proposed for Hyderabad around a year ago to the Sindh government still remain unapproved. “A summary was sent to the Sindh land utilisation department for a 200 acre site in Jamshoro and 100 acre site in Ganjo Takkar Mountain in Hyderabad. Approval is still awaited.”

According to the official, SSWMB’s office in Hyderabad remained technically dysfunctional. “We are short of staff and we can only begin working when we get the landfill sites and garbage lifting vehicles.” Until the SSWMB becomes functional, the garbage lifting vehicles of the local bodies in all parts of Sindh will continue dumping and burning solid waste in the vacant plots and pieces of land near residential areas.

Usto, who spearheaded the legal battle for clean water and environment in Sindh last year, agreed that the desired reforms in the system could not be achieved as yet but has his fingers crossed. Talking to The Express Tribune, he seemed dismayed that non-compliance with the commission’s various orders has not entailed punishment of officials concerned.

“But now the Supreme Court has taken ownership of the matter. It has become serious.” Usto, who said he fought powerful mafias across Sindh and sustained multiple pressures in the outgoing year, pinned his hopes on the upcoming hearing of the case in the apex court in last week of January. Before that hearing Chief Minister Murad Ali Shah has to submit a timeline of an array of water supply, drainage and other projects which the provincial government will execute immediately.

“Chief justice [Mian Saqib Nisar] said at the recent hearing that he would solve this problem before his retirement. This augurs well,” said Usto. The judicial commission earlier this year submitted two reports in the apex court. The Sindh government did not challenge findings of those reports. “This also sounds promising,” he observed.

The government had earlier approved only five combined effluent treatment projects for the industrial zones in Karachi. But on December 30, a meeting chaired by Shah approved construction of 28 treatment plants at a cost of Rs9.61 billion in industrial areas in 21 districts of Sindh.

The lawyer also saw the suo motu notice by the CJP of water supply in Lahore as another sign that the judiciary wanted to provide justice to the citizens who are being denied their right of pure water and clean environment. Usto counted the increasing awareness over the issue in the country as another accomplishment of his endeavours.