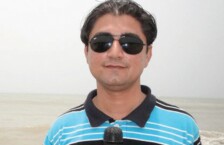 EDITORIAL: Sindh Information Minister Nasir Shah held a special press conference on Monday to announce that “the killer of journalist Wali Khan Babar has been arrested.” The accused was identified as Sheikh Mohammad Karmran alias Zeeshan. It may be recalled that the young broadcast journalist, Wali Babar, was gunned down in January 2011 while on his way home. Both the minister and city police chief described the arrest as a “great success” of the law enforcement agencies even though it took nine long years for them to lay their hands on the wanted man, who had been awarded death sentence in absentia by an anti-terrorism court. About half a dozen other accused are already behind bars. All of them are said to have been active members of the MQM.

Although the exact reason behind Wail Babar’s killing is not known, what is known is that journalists during the 2008-2013 period could express opinions critical of, or unfavourable to, the then MQM supremo, Altaf Husain, at their own risk. Wali Babar, apparently, got on the wrong side of him. Hitmen later pursued and eliminated all five witnesses (one of them hiding in Lahore), including a police officer, in Mafioso style to strike fear in the hearts of all others. Times have changed drastically since. As regards this case, no one needs to act out of fear or favour. Much will depend on how well the prosecution prepares its case that can stand scrutiny in a court of law, unlike the situation in August 2017, when the Sindh High Court had set aside a death sentence awarded to one of the accused by the ATC ordering retrial of the case. It is hoped no stone will be left unturned to ensure everyone involved, the instigator and the instigated, are held to account.

Unfortunately, impunity for the killers of journalists in this country remains one of the highest in the world. Those reporting from the restive regions are particularly vulnerable to violence from different parties to a conflict, and those in smaller towns from politically influential individuals. Just last February Aziz Memon, an interior Sindh-based journalist, was found dead in mysterious circumstances a few days after he had complained of life threats in a video post. The case would have remained covered up as suicide had it not been for the media attention the killing received. According to a Freedom Network report, as many as 33 journalists were murdered during the recent years for their work. And as per Pakistan’s Impunity Scorecard, 32 FIRs were registered for the 33 murders during 2013-19. Only in 20 cases the police filed challans, out of which six were fit enough to go for trial. That actually led to just one conviction which too was overturned at the appeal stage after the victim journalist’s family gave up pursuit due to lack of resources. This must stop. All such killings and other crimes must be properly investigated and culprits brought to justice. Pakistan must get rid of the epithet of being one of the world’s most dangerous countries for journalists.