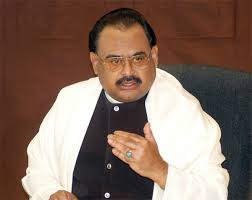 WASHINGTON: The MQM chief Altaf Hussain said on Sunday that those staging sit-in should show some flexibility and the government should also move two steps back to end the ongoing political crisis in the country.

Altaf said if the current political crisis escalated, the military will be left with no option but to defuse it to save the country.In his telephonic address to the MQM members gathered at the 18th convention here, the MQM chief said it was a “very precarious situation” that required meaningful dialogue.

Hussain appealed the government and the authorities concerned to end blockade of Geo News.The MQM chief said complaints were being received that Geo News transmission was blocked in various cities of the country and it was also disrupted in different areas. As a result viewers of this channel were facing difficulties.Altaf once again appealed to the authorities concerned to end ban on Geo News.