KARACHI: For the third year in a row the US Consulate General in Karachi marked Sindh Cultural Day with a musical performance and reception at the Consul General’s Residence evening.

Consul General Brian Heath welcomed Sindhi media contacts and dignitaries to acknowledge and celebrate the rich and profound heritage of the Sindhi people.

During the event Zulfiqar Faqir led musicians on the borendo and flute in performing several Sindhi folk music favorites.

“We are delighted to commemorate Sindh Cultural Day,” said the C.G of US Consulate in Karachi.

Brian Heath said like Pakistan the United States is a diverse nation.

“We recognize and celebrate the unique cultures that enrich our society and today we salute the cultural achievements of the Sindhi people”.

Since ancient Mohenjodaro, said Mr. Heath, Sindh has been a land of mystic Sufi poets and saints.

On behalf of the US government and its people, Mr. Heath wished prosperity and peace to the 60 million Sindhi speakers both in Pakistan and around the world.

Since 2009 Sindhi speaking people in Pakistan and around the world have celebrated Sindh Cultural Day on the first Sunday of December. 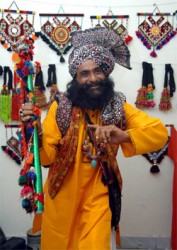