US concerned at SHC order in Pearl case 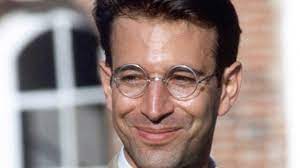 WASHINGTON/KARACHI: The US State Department took a rare break from the Christmas holidays on Friday to express its concern at the Sindh High Court’s order to release four men charged with their involvement in the kidnapping and murder of American journalist Daniel Pearl.

In a thread of three tweets, released in Washington, the South and Central Asia Bureau of the State Department said it was “deeply concerned” at the Dec 24 ruling of the SHC to release “multiple terrorists responsible for the murder of Daniel Pearl.” However, it noted that the case was ongoing and “will be following closely”.

Mr Pearl was South Asia bureau chief of The Wall Street Journal and was murdered 18 years ago while working on a story on links among various terrorist groups.

“We are deeply concerned by the reports of the December 24 ruling of Sindh High Court to release multiple terrorists responsible for the murder of Daniel Pearl. We have been assured that the accused have not been released at this time,” the tweet said. “We understand that this case is ongoing and will be following closely. We continue to stand with the Pearl family through this extremely difficult process.”

The statement came a day after the SHC struck down the Sindh government’s preventive detention order, which sought to keep the four men behind bars even though their convictions by a trial court were set aside eight months ago.

The two-judge SHC bench headed by Justice K.K. Agha observed that the detention order was issued without lawful authority and in violation of several provisions of the Constitution.

It directed the jail authorities to release the four men immediately if they were not wanted in any other custody case and any order against their release was not passed by the Supreme Court.

The SHC bench also barred the federal and provincial authorities from placing the four under any preventive detention order without prior permission of the high court and they were also directed to appear before the court whenever summoned.

However, it directed the federal authorities to put the names of the four accused on the no-fly list until the appeals against the SHC judgement were decided by the apex court.

In April, the high court had acquitted all the appellants of murder and kidnapping for ransom charges and only found the main accused, Ahmed Omar Sheikh, guilty of abducting Mr Pearl. The court sentenced him to seven-year imprisonment. Since the convict has spent around 18 years in detention, the sentence is considered completed.

The Sindh government’s announcement that the four men were not being immediately released was also welcomed by Mr Pearl’s family as his father said he was “heartened” to learn about the Pakistan authorities’ expected move.

“We would definitely challenge the SHC decision in apex court,” Sindh government spokesman Barrister Murtaza Wahab told Dawn. “The four mean are still in jail and have not been released. Our decision on the fresh SHC order is quite natural. The Sindh government already challenged the SHC verdict in the Pearl kidnapping and murder case before the Supreme Court in April 2020 in which it had overturned the conviction of the suspects. So we would also seek reversal of the fresh order.”

“We refuse to believe that Pakistan government and Pakistani people will let such a travesty of justice tarnish its name,” tweeted Judea Pearl, father of Daniel Pearl. “We are heartened to hear that the Government of Pakistan is filing an appeal against the release order so that our son’s murderers will remain in jail and justice will prevail. We also have full confidence in the Supreme Court of Pakistan to provide justice for our beloved son and reinforce the paramount importance of the freedom of the press.”