KARACHI: Tributes poured in for writers, intellectuals, activists, and poets at the final day of the 11th International Urdu Conference at the Arts Council on Sunday. The crowds too were in no mood to miss talks by eminent speakers and thronged the auditorium till the organisers had to turn away many owing to lack of space.

Saqi Farooqi, M. Umer Memon, Fahmida Riaz and Ahmed Bashir were just some of the greats that were discussed and speakers offered both critical and personal perspectives on the lives and work of these men and women.

According to Iftikhar Arif, Saqi Farooqi was a prominent and trend-setting poet and he shared many anecdotes of his various interactions with him and his witty demeanour. He had a distinctive way to weave together words in unlikely combinations, a rare quality indeed. He also has written poetry on animals, Arif said.

Poet Fatima Hassan read out her published essay on Fahmida Riaz and said that she changed the perspective of a female poet. She took on topics that were considered controversial but wrote about them so beautifully that she left an indelible mark on Urdu poetry. Ms Riaz wrote poetry as a strong and individual woman and did not shy away from expressing this thought. Her identity was her strength and refused to conform.

Prof Noman ul Haq’s anecdotes about Umar Memon were a delight to listen to. Mr Memon was a scholar, translator, poet, short-story writer and the editor of The Annual of Urdu Studies and Prof Haq charted his many achievements over the course of his life. However, it was his translations that are a class apart; Prof Haq explained that he was the king of translations.Other tributes paid were to Mannu Bhai, Rasa Chughtai and Ahmed Bashir.

A session on Razia Sajjad Zaheer was also organised where speakers spoke about the role she played behind the scene when her husband, Sajjad Zaheer, was arrested, as well as discussing her literary contribution in the form of books and magazines.Speakers shared how she was a good writer too but her contributions were never fully appreciated.

Rahat Saeed of the Progressive Writers’ Movement said that she had the ability to express day-to-day events in a very simple manner; she could easily change the character voice as and when necessary which made her a superior writer. Her characters were always fleshed out superbly and when one read her work they came to life easily.

Razia Sajjad Zaheer was praised also for her ability to independently thrive in the absence of her husband even though she faced many difficulties. She raised four daughters and two of them were present to share their experiences of having a dynamic mother.

Nadira and Noor Zaheer recalled spending time with their mother who they claimed was ever ready for any challenge and difficulty that came her way; in a way she was expecting such tough times and would gracefully welcome and handle them.

From waking up early morning before the sun would rise, to dedicating a certain number of hours to her writing every day, to raising her daughters single-handedly while her husband was in jail, Razia Sajjad Zaheer was a woman who knew that life without struggle was never a possibility.Urdu poetry and Pakistani film were also discussed on the final day of the conference. 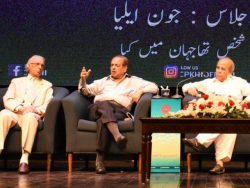