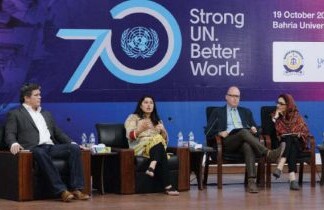 ISLAMABAD: To discuss the role of the media in development and the problems faced by journalists when talking about such issues, Bahria University hosted a seminar titled ‘Communications and Development: women in the media, documentary-making and photo-journalism’ as part of the United Nations’ (UN) 70th anniversary celebrations.

The seminar was structured around three panels with media professionals discussing the challenges and opportunities for reporting on development issues.

Ms Chinoy said the nation’s problems required soul searching and that everyone had to do so collectively. “We are committed to talking about what is happening and to talk about the people bringing about a change. It is very important to amplify the voices of those who are working to bring about a change.”

She said it was important to share information so people could understand issues, think about them, discuss ideas and engage in public debates about them at community and national levels.

Dean of the Diplomatic Corps and Ambassador of Argentina Rodolfo Martin Saravia inaugurated the event and spoke about the importance of the UN’s work in Pakistan.

He applauded the work by the World Food Programme (WFP) and the United Nations High Commission for Refugees (UNHCR) and said both agencies had immensely improved the lives of internally displaced persons.

Mr Saravia said: “While there are, of course, cases where UN interventions have not been successful, the fact remains that the United Nations has been working towards world peace and security since its creation.”

The ambassador said Argentina had been devoted to facilitating peace during the 1971 war between India and Pakistan.

“In recognition of those efforts Zulfikar Ali Bhutto presented the Argentina Park to my country in 1973 and to date, it is the only such park in the capital”.

Vittorio Cammarota, who is the director of the United Nations Information Centre (UNIC), said the UN was dedicated to solving the problems of today and build a better tomorrow.

“Peace, sustainable development and human rights are interrelated and mutually reinforcing pillars in our efforts. The 70th anniversary comes at a time of great transition for the human family. Every day the UN makes a positive difference for millions of people; vaccinating children, distributing food aid, sheltering refugees, protecting the environment, gender equality and so much more.”