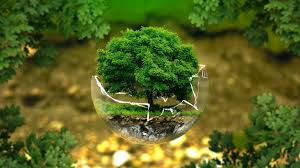 THE UN has compiled an expansive draft report on the state of the world’s environment, and as the document’s key findings indicate, there is reason for grave concern. What the report sums up is the fact that due to decades of overconsumption and unsustainable lifestyles, humans have had a devastating impact on the planet. In particular, a growing population requires tens of billions of tonnes of resources; this is having a debilitating impact on the land, the rivers and seas, and the air. The figures are indeed alarming. According to the estimates, 75pc of land, 40pc of oceans and 50pc of rivers “manifest severe impacts of degradation”. One does not have to be an environmental scientist to realise that plastic refuse is choking our drains and floating in our seas, untreated sewage is flowing into our waters and destroying marine life, and toxic air is making it hard for us to breathe.

But although the prognosis is grim, a poisoned dystopian future can be avoided if the international community — especially the industrialised states who tend to be the biggest polluters — come up with a workable plan of action to combat the effects of environmental degradation and climate change. While population control should be a central plank in the strategy, increasing the use of renewables in the energy mix can also go a long way in reducing our carbon footprint. Moreover, there must be a rationalisation of the use and manufacture of plastic. For example, in Pakistan, the ubiquitous plastic ‘shopper’ has wrought considerable damage. The move should be towards more environment-friendly materials, eventually phasing out single-use plastics. While some critics have said this country has no proper climate change policy, the fact is that the whole global community must work on a common plan, as environmental degradation does not confine itself to borders. And in this regard, those who have withdrawn from major climate accords — such as the US — and other developed states must play a bigger role in reducing their carbon footprint.