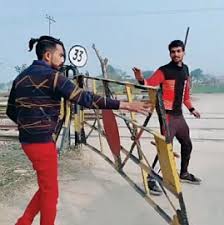 LAHORE: Railways police on Tuesday arrested two youngsters for making videos at the main railway line in gross violation of the rules and regulations.“We have arrested two TikTokers identified as Israr Gondal and Zohaib for shooting videos at a level crossing (No-33) on Raiwind-Jia Bagga section and uploading the clips on the social media platform,” Railway police Assistant Inspector General (Admin) Malik Attique told a press conference.

During the press conference, both the suspects were presented before the media, who confessed to have violated the rules.