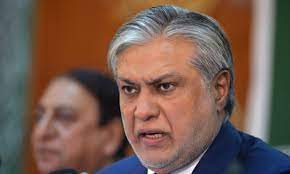 LONDON: Private channel New Vision TV, the broadcaster of ARY UK, has issued an apology to former finance minister Ishaq Dar and said its allegations of corruption and misuse of authority against the Pakistan Muslim League-Nawaz (PML-N) leader were fabricated.

The defamatory remarks were made in two news shows aired by the channel on July 8, 2019 and Aug 8, 2019. In the latter programme, Powerplay, “accountability tsar” Shahzad Akbar had alleged that Mr Dar had managed and actively impeded the work of the Financial Monitoring Unit in Pakistan by preventing institutions from accessing the systems. It was also alleged that Mr Dar had taken these steps to “protect individuals involved in the Choudhury Sugar Mills money laundering case”.

In a statement of apology aired on Monday by ARY UK at 6pm, ARY UK said it accepts that “[Mr Dar] never managed the Financial Monitoring Unit… never impeded [its] work, nor did he do anything to protect anybody in any case including the alleged Choudhury Sugar Mills case”.

“We unconditionally apologies to Mr Ishaq Dar for the significant distress, upset and embarrassment which these broadcasts have caused him,” the channel said in the statement.

Sources told Dawn Mr Dar issued proceedings against the channel for these defamatory statements in July 2020, and served a claim in the UK High Court in November the same year. On March 2, 2021, ARY UK made an offer for amends — a procedure introduced by the UK’s Defamation Act 1996, whereby a defendant in an action for defamation may make a written offer to publish an apology and pay damages. Acceptance of such an offer terminates defamation proceedings and parties settle between themselves.

In his claim, Mr Dar had maintained that the imputations conveyed by the publication constitute “very serious defamatory allegations of which the claimant is reported to be guilty as a matter of fact” and had caused serious harm.

Along with a restriction and apology, Mr Dar had claimed damages for libel of around GBP 200,000 along with legal costs.

A transcript of Shahzad Akbar’s claims on the show, which were a subject of the defamation claim, quotes the special assistant to the prime minister on accountability as saying that Mr Dar did not allow the FMU to function, adding that he had “paralyzed the institution’. He also alleged that after Mr Dar’s departure, the unit was “brought back to life” and that allegedly blocked files of politically-exposed persons were accessed. These allegations now stand retracted, and the channel has maintained that it accepts Mr Dar’s position.

In a statement shared with Dawn, Mr Dar said he has been vindicated and that the allegations made against him were “false, mala fide and evil”.

Mr Dar said this development proves “how Mohammad Nawaz Sharif and his party colleagues have been subjected to political engineering and malicious campaign of lies”.

“I have never been involved in corruption or any unlawful activity and never used any influence against any institution. The allegations made by the pro-government media house and Shahzad Akbar were aimed at damaging my reputation but Allah SWT has been most kind and the TV channel has accepted in the UK judicial process that the allegations were fabricated, false and untrue. The TV channel has accepted that I was maligned and nothing wrong has been done by me.”