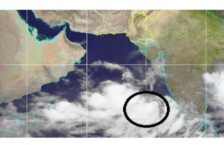 Karachi: The Pakistan Meteorological Department (PMD) has issued a formal advisory about atmospheric depression in the Arabian Sea which may develop into a tropical cyclone.

The MET department has been monitoring the weather condition at sea for the past 24 hours. Sea pressure was at a distance of 1,500 kilometre south of Karachi on Monday morning. The pressure might turn into a sea storm in the next 36 hours. As of now, no part of the coastal belt of Pakistan, including Karachi, is at risk of receiving the storm, said the MET office. However, the formation of storm may be followed by extreme heat and heavy rains near the coastal regions of Pakistan.

According to Chief Meteorologist Abdul Rasheed it takes several phases for a sea storm to develop. At first, high speed winds at low pressure in the sea transform into a depression. Then it forms a deep depression which turns into a tropical storm which then takes the shape of fully-fledged storm called the cyclone. The current activity in the Arabian Sea shows a depression while two days ago it only indicated a low pressure area. In the next 12 hours, the depression might transform into a deep depression and in the next 36 hours it will likely assume the shape of a storm.

Rasheed said the coastal regions of Pakistan are not at risk and it is unlikely that the cyclone will hit any beach in Pakistan. The situation is however being monitored with movements and changes in the depression. The met department will name the cyclone when it is fully formed, said the chief meteorologist, adding that the track and direction of the probable storm will also be determined later.

By Monday afternoon, the storm was moving at 21 degrees East and 11’7’’ West to Lakshadweep beach in India. It is premature to comment on whether the storm will reach near Pakistani coasts.

It is probable that the storm might not directly hit any coast of Pakistan but may change direction after touching the coastal belt.

Rasheed said that sea storms in the past have been observed to have taken two or three tracks. One probable track is the Oman coastal region on the northwest. Another is that it may head towards Keti Bandar coast of Pakistan as such storms in the past have been observed to do so. Besides, several instances of storm activity within the seas between Pakistan and India have also been observed in the past. This storm may head towards Gujarat, India. Yet another possibility is that the sea storm dilutes itself and does not hit any coastal region at all.

There is a chance that the storm might cause rain if it reaches close to the Pakistani coastal areas or hits them.  In such a case we might witness high wind intensity and rain. However, if the storm is considerably lower than the coastal areas, there would be no chance of rain and the heat might intensify.

Are we ready for this?

According to National Disaster Management Authority (NDMA) Deputy Chairperson and Spokesperson Brigadier Mukhtar Ahmed, all measures have been taken following the probable formation of a tropical cyclone in the Arabian Sea. He said the NDMA is in contact with the MET department and the situation is being monitored in light of the information being released by the MET department. NDMA is also in contact with the Sindh NDMA and the Balochistan NDMA and preparations are in full swing. The Pakistan Navy, Pakistan Coast Guards and Pakistan Maritime Security Agency have been put on alert to meet any emergency situation arising out of the probable cyclone.

Meanwhile, the directorate of Sindh Fisheries, in a notification on Monday, has said that after the advisory issued by the Met department, they have asked the fishermen who had taken to sea to hunt fish in Karachi, Thatta and Sajawal to adopt precautionary steps and return immediately so that dangers to lives and properties could be avoided. Also, those fishermen who are about to go to the sea must wait for two to three days for improvement in the condition of the sea.