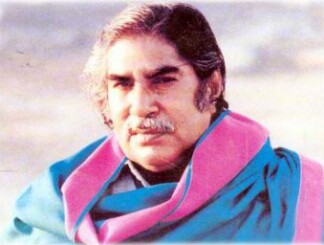 Shaikh Ayaz represented voice of the masses. His words echoed feelings of the downtrodden against oppression by dictators and autocrats.

This was the unified opinion of people who attended an event held on Sunday to mark the 91st birth anniversary of Sindhi poet Shaikh Ayaz. Organised by the Radio Pakistan, the ceremony was held at the Karachi Arts Council and was also streamed live over the radio and internet.

Clutching a copy of Ayaz’s works, an elderly gentleman waited on stairs of the open-air theatre for the show to begin. “I met Ayaz decades ago,” said Mr Muhammad. “He was a young man then, full of passion. The bravery with which he said what others fumbled over, was remarkable.”

When asked how he had heard about the event, Mr Muhammad beamed with pride and replied, “I heard about it over the radio. I have driven all the way from Hyderabad just to be here.

I am happy that he is being acknowledged at this level.”

Despite a few operational glitches, the event started with a melodious performance by folk musicians.

Director General Pakistan Radio Murtaza Solangi recalled that Ayub Khan had banned Ayaz on the radio. “But now the entire country can listen to his work,” he said. “In Ayaz, we have a strong example of resistance against political oppression in the form of dictatorship. It’s an honour for me to be present at this tribute.”

Scholar Taj Joyo said that Ayaz was one of the greatest poets of the 20th century. “He was someone who had command over philosophy and a clear thought process. He set an example for the younger generations of poets.”

A musical show was also put forth on the occasion. Conducted and composed by Shahid Bhutto, the programme included soulful renditions by Ustad Nazeer Khan, Abdullah Khan, Muhammad Achar, Shahid Hussain and others.