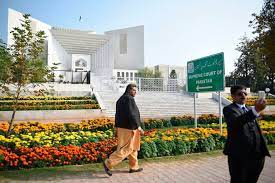 ISLAMABAD: The Supreme Court has ordered the provincial advocate generals and Federal Investigation Agency to submit reports on the incidents of alleged torture and harassment of journalists during the past year.

The court released the written order of its hearing on September 13 of suo motu notice of the case.

The ruling ordered the bosses of FIA and Pakistan Electronic Media Regulatory Authority, and the Islamabad police chief to submit a detailed report in this regard.

It also directed all the provincial advocate generals to compile a chronicle of the incidents that occurred in 2021.

The Supreme Court asked Sanaullah Abbasi, director general of the agency, to present a report detailing such cases and subsequent FIA investigations.

It ordered the attorney generals and other law officers to help the court regarding Section 27 of the Pemra Ordinance, 2002.