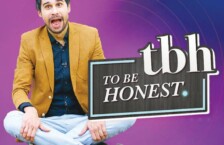 ISLAMABAD: ‘To be Honest’, has become Pakistan’s first digital show to be telecast on any television channel. This announcement was made earlier today by the show’s director and creator Azfar Ali. He said ‘‘To be Honest’ has made history by becoming Pakistan entertainment industry’s ‘Digital First’ show. Initially streamed on Nashpati Prime,it is now being broadcast on TV One, making it the first Pakistani entertainment internet show to be taken on by a TV channel.’The show is hosted by well-known standup comedian Tabish Hashmi and has an array of guests from the entertainment and digital arena. Speaking about this breakthrough and new relationship development between the electronic media and digital media a visibly excited Hashmi said ‘The web industry in Pakistan has been coming of age over the years, especially with respect to video-on-demand platforms. Although such endeavors are still few and slow in growth, this initiative marks an important milestone for our entertainment industry and carves a road map for others to follow suit.’