Saigol, it seems, likes to dazzle the viewer. Not at the cost of blinding them to beauty and splendour but to make them appreciate the aesthetics that are involved in life, in art and in the things that no longer exist but remain with us as remnants that we cannot afford to ignore.

Saigol names his show Time present, time past. Reason: he puts side by side characters — grand and luminous, sad and indifferent, slightly contented and brittle — that are both from the days of yore and the era we live in. He makes it obvious by, despite placing them in a single setting, contrasting the two worlds as colour and black and white. To say black and white would be unjust. He greys some, and colours others.

‘At the court of the Begum of Bhopal, 1863’ (acrylic, oil, gold, dry gouache on canvas) is not just an artwork; it’s an examination of that part of our history which refuses to go away. The trick is to peruse the faces that the artist has painted. They are stern. At this point the very important issue of silence makes its presence felt. Saigol’s artworks exude an atmosphere that conjures mixed images. If on the one hand it delights the viewer for its pure aesthetics, on the other hand it creates an intellectual space where to revisit the past is not an exercise that anyone could undertake with glee. And that’s where the artist impresses. He is creating beautiful images and raising questions at the same time.

Out of the Forest

It would be an understatement to say that Alia Bilgrami is a talented artist. She knows very well what artistic pursuits can achieve in terms of pointing out things that society tends to conveniently overlook. To boot, her artworks never fall short of the visual appeal that’s extremely important for any artistic endeavour.

Her show is titled Out of the forest. The forest here is not used as a symbol of myths and fanciful stories, though it might appear so. Rather, it exists as a worthy tribute to nature. A tribute, however, is not always an attempt to highlight mirth and joy. Bilgrami wants to draw the attention of the viewer towards nature and some feminine characters (and characteristics) that she admires and wants others to admire. In that regard, memory plays an important part in her artworks. Hence two remarkable pieces in the form of ‘Memories adrift’ and ‘Memories afloat’ (mixed media on Canson). The memories contain nature — greenness, architecture, etc — in quite a few of its manifestations. What the artist does to denote the struggle with memory is that makes swishy strokes around the buildings, suggesting a kind of haziness, a fog that has shrouded it all. Good job! 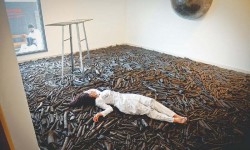 Washed upon the shore … and more 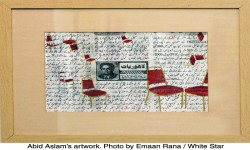