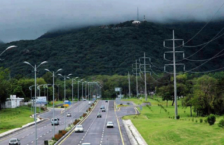 ISLAMABAD: Thousands thronged the charity bazaar on Sunday held under the aegis of Pakistan Foreign Office Women’s Association (PFOWA). The hallmark of the bazaar, as usual, was the presence of various foreign missions that established their stalls. At the stalls, the foreign missions displayed various items depicting lifestyle, culture and traditions of their respective countries.

Besides, the event provided the guests with an opportunity to taste delicacies of various countries.  The Central Asian and Arabian cuisines remained centre of attraction for the visitors.

The bazaar brought together a vast mix of cultural diversity from different countries.

First Lady Samina Alvi inaugurated the charity bazaar at the premises of Foreign Affairs Ministry, where stalls showcased traditional artifacts of countries including China, Tajikistan, Saudi Arabia, Morocco, Russia, Azerbaijan, Indonesia, Egypt, Iran, Japan, Maldives, Central Asian states, Malaysia, Sri Lanka, Turkey, Uzbekistan, Iraq and Palestine. Earlier, the first lady in her address said it was heartening that the charity bazaar was presenting a bouquet of culture, art and cuisine with an essence of harmony and an affinity among different nations.

She lauded Ministry of Foreign Affairs and the diplomatic community in Islamabad to team up for the noble cause of philanthropy.

PFOWA Patron Mehreen Qureshi said the Association was adhering to its mission of philanthropy since 1947 to reach out to low-income families in diplomatic corps.

A ‘Parade of nations’ was held where children of diplomatic staffers, donning cultural dresses of their respective countries, presented tableaus and waved their respective national flags The PFOWA bazaar also provided the visitors an opportunity to indulge their taste buds into the dining experience of a variety of cuisines from different countries.

On the occasion, the ambassadors of different countries participating in the event talked exclusively with The Express Tribune.

The Azerbaijan Ambassador Ali Alizada said that the organisation of the charity bazaar would highlight the positive image of Pakistan around the world.

He added that the programme has given a message that Pakistan was a peaceful country and was ambitious in establishing friendly relations with its neighbors.

The ambassador said that the charity bazaar was a good initiative and their embassy took part in it every year.

“This is not just a charity programme but an event in which all ambassadors along with their families meet each other under one roof,” Alizada said.

Talking about the food stall with traditional Azeri cuisine set up at the event, he said that the food was liked by many Pakistanis and foreigners through the bazaar, got a chance to promote their culture and tradition.

Further, the Ukranian Ambassador Volodymyr Lakomov also hailed the programme and said that it was a great initiative through which one could learn about other countries’ cultures, traditions, music, languages, geography, and history.

He added that Ukraine had also set up a food and arts and crafts stall while the performance on traditional dance was much appreciated by all the participants.

Indonesian Ambassador Iwan Suyudhie Amri expressed that it was an important event and the primary reason behind its organisation was to understand the pain of others and help them.

He said that such programmes not only helped alleviation of problems of the needy but they also promoted peace, prosperity, and love among the countries.

The ambassador added that the programme would strengthen cultural, social and economic ties between Indonesia and Pakistan.