The power of a journalist | Pakistan Press Foundation (PPF) 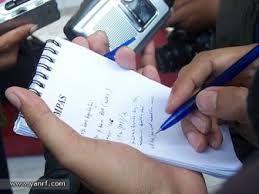 ISLAMABAD: Top journalists around the world want to be remembered for their scoop. From Watergate to Axact scam, the pride of any journalist is his or her story and its credibility. Delcan Walsh, the New York Times correspondent who became the news last year when he was declared persona non grata by the Pakistani government has become a household name today for unmasking the biggest fake degree scandal.

Walsh’s latest journalistic work has created a stir in Pakistan and his story has become Pakistan’s biggest news story since Mehran Bank scam of the 90s. It reminds one BCCI, Samad Dadabhoy and the investment companies scams in which people lost billions of rupees at the hand of one person.

Several government were dismissed in Pakistan on the basis of major media stories, mostly linked to corruption.The NYT report has now resulted in the arrest Axact CEO Mr Shoaib Sheikh. It could be the start of a long legal battle, but certainly all this has become possible because of the NYT story.

Since no defamation case has so far been filed against the paper or the journalist, who stand by his story, the Axact is fast losing time. So, as situation stand today, the FIA investigation has given further strength to the news item.

It also reflects on the power of the journalist, if he or she uses it to expose the wrongdoings. It also shows what ‘breaking news’ means. Some critics wonder why no Pakistani journalist investigated this story and why it came from a foreign journalist.

For the past two years many stories had been circulating about Axact’s exact business and with the passage of time it become talk of the town, though most of these stories were based on conspiracy theories like who is behind Shoaib Sheikh? Is it Malik Riaz, Dawood Ibrahim or ISI? While debate continued in the newsrooms, Press Clubs and in restaurants, an American journalist came out with the scoop of the decade.

The issue of fake degrees has hit millions in Pakistan and abroad. Those who issued such degrees are facing legal action but it also raised a moral question about those who obtained such degrees through illegal means. All those who were in this business should be brought to justice, but those who sought such degrees were no angels either. Walsh continued his investigative work on this particularly story even when he was asked to leave Pakistan within 48 hours. It was not possible for him to do the story without complete editorial support of NYT.

The issue of fake degrees first hit the Pakistani politicians after the 2008 elections and many legislators including some ministers also lost their positions, but everyone missed the real story of fake degrees.

“Get the story first, but first get it right,” is a famous saying and perhaps that could be one of the reasons why it took Delcan Walsh so much time to get it right. We all believe that a person is innocent unless proven guilty and the media must respect the suspect’s right to defend himself.

In the last three decades we had seen people become billionaires overnight, but in the last 12 years one has noticed people getting in this media business not to serve or inform people but to protect their other business ventures and use media as cover.

I met Shoaib Sheikh only once about two years back when he invited me along with many other journalists to his Axact office in Defence Phase-11, which has now been sealed. I was impressed with the office environment but found the atmosphere quite unusual and unlike any multinational company. What struck me the most was too much protocol for a person whose aim was to become Pakistan’s No 1 media tycoon.

To be very honest, I was impressed after looking into BOL’s full-page advertisement in DAWN, promising the best working conditions no other media house could offer. So I congratulated him. But, when he said “ we will give our journalists luxury cars like Mercedes etc. I interrupted and asked him not to pamper journalists with such luxuries, as this will distract them. But I did praise him for trying to improve the working conditions of journalists as I have been fighting for high professional values and rights for workers throughout my career. In March he announced launch of his new channel and everyone in the ceremony was excited.

I still hope that our media houses will improve their own working conditions and will create a professional atmosphere. We all need to learn the right lessons from what happened in the last two weeks. The Axact story is not finished yet. What happens next will depend on the outcome of the legal battle. The writer is the senior columnist and analysts of Geo, The News and Jang.