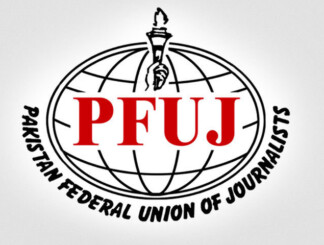 ISLAMABAD: The Pakistan Federal Union of Journalist (PFUJ) has given a call for countrywide protest on Monday (tomorrow) against the adoption of the Punjab Assembly Privilege Bill 2021 which envisages award of punishment to journalists over publication of reports about the proceedings of the assembly and its committees.

The call was given by PFUJ president Shahzada Zulfiqar and secretary general Nasir Zaidi through a statement in which they asked all union of journalists (UJs) to organize rallies and hoist black flags at press clubs to protest against the “brutal” piece of law.

The amendment bill was tabled in the Punjab Assembly by Pakistan People’s Party member Makhdoom Usman as a private members’ bill and adopted with consensus by the house.

The PFUJ leaders said the bill would undermine the freedom of the press.

They said the new law awarded three-month imprisonment or Rs10, 000 fine, or both, for publication of a report on the proceedings or a report of a committee before it was reported to the assembly or published in the official gazette.

Meanwhile, the PFUJ has condemned what it called the insulting treatment meted out to the journalists in Quetta by the police and the “fascist tactics” employed by the Balochistan government to prevent the media from covering a press conference of opposition leaders in the city.

In a statement, Mr Zulfiqar and Mr Zaidi said “sledgehammer tactics” against the journalists would not be tolerated at any cost.

The PFUJ leaders called upon the Balochistan government to take action against those who had ordered the police to take the undemocratic action.

If the government failed to take action, the journalist’s fraternity would protest across the country, the two leaders warned.