When we say we live in the backwaters of what passes for the civilised world, we are dead right. The great changes that sweep the world day and night find little mention here. The arts particularly find no mention and, while dozens of great men and women come and go, we are always the last to know. Thus, the tragic death of Christopher Martin-Jenkins remained virtually unreported. Jenkins, you ask? Who was he? Indeed who was he?

CMJ, as he was affectionately called, was one of the world’s foremost authorities on cricket. As a superb commentator, writer and analyst – the likes of whom we will never see – he did everything humanly possible for a game he loved. Of course most of us did not know him or of him. And while cricket in its most ridiculous format may be our lifeline, those who brought grace and poetry to the game remain unknown to us. We are more into the circus not the essence of this classic game.

Not being English and not knowing the language kept the likes of CMJ far away from us. Sadly he did not and could not broadcast in Urdu or indeed write in it – a language most ill suited for the game of cricket. When he died of cancer early this year within days of the death of Tony Greig, cricket lost two of its great exponents though differently styled or, as the Indian broadcaster and writer Harsha Bhogle put it so well, “maple syrup and vinegar”.

Martin-Jenkins joined the BBC in 1970 after a period with the Cricketer magazine, which he joined straight from university and would later return to edit between 1981 and 1991. He became an integral part of the Test Match Special commentary team from the early 1970s until his ill-health forced him to step back in 2012 and for a period in the 1980s was part of the television team. He was the BBC’s cricket correspondent in two spells from 1973 to 1980 and 1985 to 1991.

He was also a huge figure in the newspaper industry as cricket correspondent for the Daily Telegraph between 1991 and 1999 before moving to the Times, where he held the same position until 2008 before handing over to Michael Atherton. He continued to contribute to the paper until as recently as when he wrote about the death of Tony Greig: “It was probably for him a merciful release because the late stage of any cancer is often hell on earth.”

Martin-Jenkins was awarded an MBE in 2008 and stood as the Marylebone Cricket Club (MCC) president in 2010-11. He also played cricket for MCC on 67 occasions. Shortly after his illness was diagnosed, he released his memoir, CMJ: A Cricketing Life. In 2007, he became the only career journalist and broadcaster to deliver the annual MCC Spirit of Cricket Cowdrey Lecture. Previous lecturers had all been former international cricketers.

Jonathan Agnew, the BBC’s cricket correspondent, said “He was one of cricket’s most respected writers and broadcasters. With modern media now preferring the views and experiences of former Test cricketers, Christopher’s authority and respect was gained not through a high-profile playing career, but a deep-rooted love of the game.”

He added, “Listeners to Test Match Special will be all too familiar with CMJ’s eccentricities, like going to the wrong ground for the start of a Test match, for example. His legendary chaotic time-keeping was very much part of his charm.” Said one fan, “it’s doubtful if anyone has contributed more in a lifetime to the overall coverage of cricket than Christopher Martin-Jenkins.” Tributes from colleagues and former players – Derek Pringle and Ian Botham amongst many – flowed in. Giles Clarke, the ECB chairman, said: “Cricket has lost one of its greatest champions. Christopher was a supremely talented broadcaster and writer; a fount of knowledge about cricket – both past and present; and, as a devoted supporter of Sussex, someone who cared deeply about county cricket and the wider recreational game. These were the qualities which made him an excellent president of MCC. He was a man of great personal integrity and a true gentleman.”

While browsing online, I came across some interesting feedback and comments on the Cricinfo website. They are thus reproduced: “The game produced radio commentators who were professional broadcasters but who loved cricket- John Arlott, Jonners, Alan Gibson, Don Mosey. Although they didn’t have personal experience of playing at the top level, their knowledge of the game and wonderful, distinctive voices brought the radio commentary to life. CMJ was the last of that great group and with his passing an era has ended.”

“Where would we ever find the likes of Peter Baxter, Brian Johnson, Henry Blofeld, Freddie Trueman, Don Mosey, Trevor Bailey, Tony Cozier…the line is as long as it is distinguished. Christopher was a true British Broadcaster, the very last of the beautiful amateurs.”

“Cricket spawns more stories than any other game and perhaps the best CMJ story has to be when he tried to make a call from his NZ hotel room – he apparently wrestled with the technology for about 15 minutes, before realising it was a TV remote control!! He was an eloquent and high class highly professional cricket commentator and writer in the English language, like so many well polished English cricket broadcasters were from the bygone eras of cricket broadcasting in England on TMS. Perhaps Henry Blofeld is the only one left standing. These were Brits who spoke the Queen’s English perfectly on the radio. That’s if you like that style of commentary.”

In a write-up on Martin-Jenkins (‘Where is the next generation of broadcasters coming from?’), Harsha Bhogle says, “The broadcasting world is significantly poorer for their absence. And as we mourn them, we must also look at the changing contours of the profession, as the beauty of the spoken word and the elegance of description are increasingly rendered irrelevant in the chase of the box-office name. A younger version of Tony Greig can still hope to have a commentary career if he is willing to learn the skills that the great Channel 9 quartet of Benaud, Chappell, Lawry and Greig had, but another talented CMJ – one cannot even dream of it.”

Bhogle adds, “The essence of broadcasting remains the ability to communicate the drama to those watching or listening; to be able to educate but also to get them to feel the emotion, for that is what sport really is, a great theatre of emotions. Sport needs narrators to bring the game alive, and even if you have been there yourself as a player, you must possess the ability to tell the story in as compelling a manner as possible.”

I have quoted liberally from Cricinfo because both the comments and Bhogle’s story capture the essence of what one is trying to say. Here in Pakistan, things are dismal. The great duo of Omer Kureishi and Jamshed Marker is long gone and they have never really been replaced. Worse, Urdu crept in – agreed that more people could follow the game but that just about killed the drama of cricket. Urdu cannot do justice to it. With TV and many sitting there unable to tell radio and TV apart, things are worse.

Describing Pakistan’s pacer Asif Masood years ago, the immortal Arlott said, “Asif takes a step and then like a butler who has seen something he should not have, takes two steps back.” The poetry of class and a moment captured. That was broadcasting! 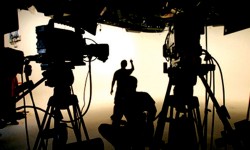