Terrorism and the role of media | Pakistan Press Foundation (PPF)

Terrorism and the role of media

LAHORE: Freedom of media is always subject to responsibility and to abide by media ethics in the form of self-imposed restrictions and self-regulation, keeping in view religious values, norms and traditions of a society.
In the case of Pakistan, the electronic media is enjoying unprecedented freedom since the year 2001, when the electronic media underwent mushroom growth. However, this freedom is without the sense of responsibility and following any code of ethics. This is a big question mark on the role of Pakistani media.
Beyond any doubt, the media has also contributed positively in society as per its basic functions of information, awareness and education of the people; however, the race of rating and unhealthy competition to break the news first and giving coverage to terrorists or serving their agenda indirectly is making the role of media also negative in society.
The US media despite having information about Raymond Davis didn’t reported against him, keeping in view their national interest.
In Pakistan, the situation is completely the opposite. Reacting to the terrorist act of 16/12 in the Army Public School Peshawar, when the Pakistani government and the army leadership decided to award capital punishment to all convicts, many television channels started broadcasting reports on the availability of such convicts in various jails across the country. Media policymakers and content managers didn’t even bother to take care of the fact that actually revealing information on such a sensitive issue would create security problems in all prisons.
The television channels even tried to defeat their competitor channels in reporting what were the security updates in poisons and the number of deployment of security personnel and commandos in the prisons. The media channels indirectly served the terrorists who always make efforts to get their men freed from jails. The hourly news bulletins and breaking news on such information is still continuing on all news channels.
For all their planning, the terrorists get information through the media. This information though the media and their funding are the backbone of planning terrorist activities.
While reporting the 16/12 Peshawar incident, our media persons were seen shedding tears and using very emotional and sensational words in a very dramatization manner. Some channels even went to the extent of claiming that they were reporting and showing footage first of all as the death toll of schoolchildren was increasing. This is completely a non-professional attitude. A few days ago a female TV anchorperson was broadcast shedding tears and reporting a protest demonstration in Lahore by the channel administration perhaps just to get public sympathy and rating through her tears. Was it a professional attitude of the media organisation?
Terrorists proudly claimed the responsibility of Peshawar incident and other terror activities in the country. This claim of the responsibility is also broadcast trough national media and sometime video footage messages of terrorists are on-aired serving the very purpose of the terrorists. Our media is providing free advertisement to the extremists and terrorists serving their interests. It has to be re-evaluated and regulated by crafting a purpose-built media code of ethics
Almost all television channels broadcast crime stories dramatization and act as crime glorifying agents. Some car thieves who were arrested during their criminal activity red handed they admitted that they learnt how to break China lock of car staring by watching a new channel crime dramatization episode.
Many media channels are also highlighting the external enemy’s narrative by building some hypothesis and countering the Pakistani government’s point of view and promoting their logic and reasoning.
Renowned media educationists and media ethics experts Dr Mahdi Hasan, Dr Shafique Jullandhry, Dr Mujahid Mansoori have a consensus that the role of gatekeepers must be revived in the media which is missing in the case of electronic media. These gatekeepers act as evaluators of the outcome of the media contents setting aside the economic interests, concept of rating and unhealthy competition.
Secondly, media persons must be sensitised and give training. Frequent meeting with the media managers and content controllers may help in making the media more responsible.
Thirdly, by law a seat of Ombudspersons be established in all media channels to listen to complaints. Thirdly the role the Pakistan Electronic Media Regulatory Authority (PEMRA) must be activated in a practical manner. Since PEMRA lacked the capacity to monitor news channels 7/24 therefore media consumers must be educated on how to response and complaint in case of any lack of responsibility on the part of a media channel.
Interior Minister Chaudhry Nisar Ahmed had also requested the media to evaluated its responsibility and behave in a befitting manner keeping in view the sensitivity of time. He requested the media persons not to serve the agenda of the terrorists indirectly by broadcasting all types of information.
While addressing a media conference on terrorism Jamaat-e-Islami chief Sirajul Haq quoting a British friend said there were only two things to get rid of terrorism. First by extending education to all and secondly by giving zero media coverage to terrorism related incident like bomb blasts. He said in UK 50 per cent of terrorism was controlled through discouraging media coverage of such happenings. Salman Ghani said media channels and media persons instead of shedding tears for the sake of rating, must spread awareness against terrorism in a very professional manner.
Absence of any code of ethics for the electronic media was the real problem. Following the Hamid Mir attack issue and its effects, the prime minister had formed a committee headed by Irfan Siddiqui and the information secretary Muhammad Azam held series of consultative workshops in major public sector universities to take input from academia.
To this effect a Consultative Conference on “Removal of Ambiguities in the Code of Conduct of Electronic Media and Devising an Effective Implementation Mechanism” was held at the Institute of Communication Studies, University of the Punjab on July 04, 2014. About seven already formulated codes of ethics of press were circulated among media experts. However, to date, no consensus code of conduct has been made public by the ministry.
Daily Times 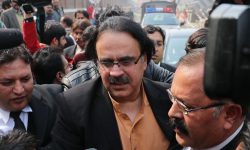