Tasnim says has no evidence of murder plot against Imran, journalist -
ISSN 2226-7492

Tasnim says has no evidence of murder plot against Imran, journalist 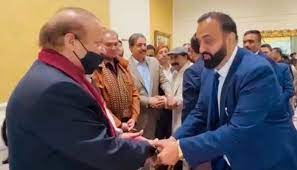 LONDON: Syed Tasnim Haider Shah, who claimed that the assassination plot against PTI chief Imran Khan and slain senior journalist Arshad Sharif was made by the PMLN in London, has accepted he has no evidence of any kind to prove his claims and that PM Imran Khan’s shooter has reached Kenya and belongings of Arshad Sharif have reached London too.

In an interview here, Syed Tasnim Haider claimed that Arshad Sharif’s laptop, I-pads and other gadgets have also reached London and that Waqar and Khurram were in touch with PMLN UK senior vice president Nasir Butt. He said Nasir Butt had told him all of this.

He claimed that as soon as he became aware of the alleged plot to kill Imran Khan, he sent a message to him though British Pakistani businessman Liaqat Mahmood (also known as Malik Liaquat), who sat with him at the press conference on 29th October that there was a plan to kill him. “Imran Khan replied that these people cannot do anything to him. He said that he had left it to Allah,” Tasnim said quoting Malik Liaquat who is a close friend of Omar Sarfraz Cheema, the senior PTI leader and currently Punjab’s interior ministry adviser.

“Malik Liaquat spoke to an MPA or MNA who passed the threat alert to Imran Khan and then he responded, Malik Liaquat told me this,” said Tasnim Haider, adding that Omar Cheema stays at Liaqat Mahmood’s home when he visits London.

Tasnim Haider claimed at the press conference that he has evidence which he has handed over to the police but during an interview with this publication denied having any evidence of the conspiracy and said he himself was the evidence.

Pressed what evidence he has, Tansim said: “I have no evidence. No audio evidence. No WhatsApp chats. Nothing else. There is no record of my meetings with Nasir Butt.”

He claimed that Nasir Butt told him that Arshad Sharif’s laptop, I-phone and other gadgets have reached London. “He told me he needed these three things. He says he has all these things. I believe Arshad Sharif’s laptops have reached London and are with Nawaz Sharif and Imran Khan’s shooter has reached Kenya. One of the shooters, Imran Khan has reached Kenya. Nasir Butt told me. There is no WhatsApp chat record. I am not playing games.” Do you have any chat? They invited me but I never did so. I am a busy person.”

Asked if he had informed the Kenya police about this, he said: “They are so corrupt that they will not take any action against Nasir Butt.”

He said he would make sure that Nasir Butt and Nawaz Sharif get 25 years each in jail for their role in the conspiracies. He confirmed that he had visited Scotland Yard with his solicitor Mahtaz Aziz on Friday and gave a written application against Nawaz Sharif and Mr Butt and visited the police again on Saturday but the police have taken no action. He said: “I have told Scotland Yard Nasir Butt is linked with Waqar and Khurram. It’s for the UK police to take action. If no action is taken in the UK, I will take them to the Supreme Court of Pakistan.”

“I accept that I agreed to provide shooters to them to attack Imran Khan and I promised I will arrange for shooters but later I told them I cannot. When Nawaz Sharif and Nasir Butt asked me to arrange for shooters in Kenya I told them I don’t have anyone there. Nasir Butt told me he will deal with Kenya and Arshad Sharif but I should deal with Imran Khan in Gujrat. They said Chaudhary Pervaiz Elahi will be blamed for the killing. We discussed the murder plan verbally on Eid Day on 8th July when I met Nawaz Sharif,” said Tasnim Haider.

When told that Nawaz Sharif had left the office publicly after meeting about 60 people inside on Eid Day, Tasnim claimed he had met Nawaz Sharif again that day in the office when nobody was around. He initially said that the murder plan was made after Eid prayers inside the office but “that was a little bit”.

He said for the July 8 meeting: “I don’t have any evidence. I am the living evidence.” Asked why Nawaz Sharif would ask him for such a heinous crime, Tasnim Haider replied: “Nawaz Sharif told me in that meeting he wants to become Prime Minister for the fourth time and I need to get rid of Arshad Sharif and Imran Khan. He said Arshad Sharif has our videos which he is about to release. Both Butt and Mr Sharif said that. We talked about the shooters on 12th October and 20th September in our meeting.”

He claimed that when PM Shehbaz Sharif came to London he was invited to meet him and Maryam Nawaz but “I refused to meet them because I was busy”.

Why did it take his “conscience” so long to wake up and speak about the conspiracy? “It has taken a while for my Zameer (conscience) to wake up. Nasir Butt used to tell me to be ‘khamosh, stay quiet. Nasir Butt is also scared of Nawaz Sharif and wants to leave the party.”

Journalists asked Tasnim Haider why he didn’t speak out when Arshad Sharif was killed or when he left Pakistan, Tasnim Haider replied that he was under pressure. He then claimed that a “celebration party” was held in London after Imran Khan was attacked. “I told Nasir Butt that Imran Khan survived the attack and he told me to be “khamosh” and not say anything. Nasir Butt told me the PMLN will throw a celebration party in a London hotel and I was invited too.”

When asked why Chaudhary Pervaiz Elahi had made his cousin an adviser recently and why he congratulated Elahi and urged his family and friends to join the PTI’s long march, he said it was just to express his support for the Chaudhrys.

Tasnim Haider claimed that he was introduced to PTI lawyer Mahtab Aziz by businessman Liaqat Mahmood. “My press conference was arranged by Malik Liaquat, he is close to Omar Sarfraz Cheema and he is the one who passed the message to Imran Khan. I found out that Mahtab Aziz is a PTI lawyer.”

Tasnim Haider said that Punjab PTI leader Omar Sarfraz Cheema called and offered him protection and help after the press conference. Meanwhile, Nasir Butt announced on Monday that he was launching a defamation case against Tasnim Haider. He lodged a case of harassment and fabrications against Tasnim Haider at the Greenford police station.