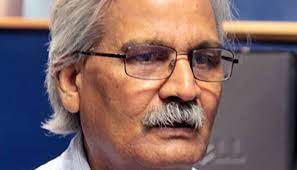 LAHORE: The Pakistan Federal Union of Journalists (PFUJ) General Secretary Nasir Zaidi has said that there can be no negotiation on the Pakistan Media Development Authority (PMDA) Law as it is a martial law.

This was announced by the PFUJ General Secretary Nasir Zaidi in a multi-stakeholders convention on ‘Legislation, Regulation and Media Crisis: The way forward’. He said media is in trouble. “While we have been in this situation for very long and have dearly paid the price, now we are fully cognizant of the fact that we are not going to get out of this troublesome situation until we come out on the road. Now is the worst situation regarding freedom of press,” he said.

A national level convention will be held in Islamabad, he announced. Zaidi called for a broad-based alliance of all those who are struggling for their rights and the state is not ready to give them their rights. He recalled how media people were rendered jobless in National Press Trust papers for being progressive.

The long march that will start from Quetta and conclude in Islamabad is to take our rights, he said. Some newspapers have not paid salaries for many months while one has made such a mechanism that salaries have reduced instead of increasing, he added. “We want to take our rights,” he said.

Senior journalist Naveed Chaudhry said, “This system is not working. The ‘hybrid regime’ told us we won’t be allowed to open a channel in Karachi. We were following the law of the land and could not see how we were wrong but a Sindh High Court judge announced closure of a TV channel, rendering a large number of workers jobless. The ban on media is very unfair. It is condemnable,” he said.

Hamid Khan, veteran Advocate Supreme Court said, “Free media is possible only with free judiciary. The establishment has been doing political engineering for long. Now they are doing judicial engineering. This will directly affect freedom of media,” he said. “How can they do pick and choose in judicial appointments? A judge who receives favour by undue appointment will always remain under pressure,” he said. Imtiaz Alam of South Asia Free Media Association (Safma) said media’s interest is in protecting public interest. “There is no freedom. Space for civilians has shrunk over time. The next war will be on roads,” he said.

Veteran journalist Hussain Naqi said, “A group of rulers is pushing Pakistan to anarchy. PFUJ has been struggling for economic rights and the right to information and freedom of expression. We lost East Pakistan because information was unavailable.” He advised that if we want to succeed, we should take students along as well. So far they are not in the movement for freedom.

PFUJ President Shahzad Zulfiqar said media’s job is to report the truth. “That is in people’s interest, not giving our version by adding or subtracting from the truth but stating the truth as it is – that is important. The war we are waging is in the interest of the society, it is to protect people’s right to receiving correct information. We have been cornered. They want to take away social media space from the people. There will be no compromise on social media,” he said.

Jawad Ahmad of Barabri Party said media needs to help a party that represents the left and stands with the workers and labourers. Imran Khan is not their leader. He has 14 properties. He vowed to support media in its struggle.

Others who spoke on the occasion were Pakistan People’s Party and Awami National Party representatives, labour leader Khursheed Ahmad and a member of Journalists Defence Committee (JDC) Sabahat Rizvi who enumerated cases where the JDC had helped media people.