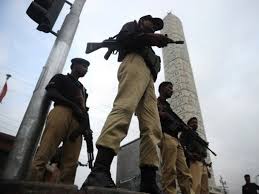 LAHORE: A regional police officers (RPO) conference held at the Central Police Office on Monday finalised standard operating procedure (SoP) for the security of the media houses all over the province.

Chaired by Punjab IG Mushtaq Ahmad Sukhera, foolproof security for the media houses was the main focus of the conference in the wake of the attacks in Faisalabad and Lahore.

According to the SOP document, all media houses will build at least eight feet high boundary wall with two feet razor wire.

It said a bunker at vantage point/rooftop of the building should be erected and concrete barriers be affixed at main entrances.

All media houses would install walkthrough gates at their entry points and all visitors must be properly searched before entrance. Emergency alert system on the pattern of schools will be activated in all media houses and this system will be connected with Rescue-15, respective DPO, SDPO, SHO and CPO Control Room.

All security guards, who will be hired from any recognised security company, must be deployed after getting vetted through special branch of Punjab Police.

The Lahore SP (headquarters) will be the focal person whereas, in other districts, the officer of the rank of SP/DSP will be designated as focal person and their numbers will be shared with media.

In Central Police Office, Lahore, the AIG (operations) has been designated as focal person for coordination with media.

The conference also decided that the joining of the officials after transfer or promotion could only be accepted after receiving their sealed documents through courier and after their personal appearance before the respective SPs and DSPs.The RPOs of nine regions attended the conference through video link besides Lahore CCPO retired Capt Amin Waince and other senior police officers.