KARACHI: There’s something about Karachi: inexplicable but influential, in more ways than one. Karachi’s artists are a testimony to this claim. Their work sets them apart from the artists belonging to the rest of the country. The turmoil that the city has undergone, or has been undergoing, for quite some time reflects in their paintings both on a personal level and impersonal plain, sometimes in the form of deep philosophical musings. This can be gauged from an exhibition, Six Karachi Painters, which is under way at the Alliance Francaise Karachi.

Akram Spaul achieves feats with realism that creates difficulty for the viewer whether to classify his paintings as such, that is, in the realistic domain. An orange bucket, a blue towel and a green water tap constitute a scene that speaks of a realm that exists, rather super exists, in a nonexistent way. The artist does not want you to imagine things as he does. He wants you to enjoy them.

Sharjeel Sarfaraz makes no bones about what he wants. In an intriguingly titled piece ‘Miracle’ (oil on paper), he pushes the viewer to embark on a maritime journey that his protagonist already has. The boat may seem like a papery thing a child makes or something you see in a dream and wake up knowing it was just a dream. And that’s where the word ‘miracle’ lends a touch of truth to the whole image.

Henri Souffay and his ‘Athena’s Garden’ (pen and ink on paper) is talking of wisdom, of course, with a difference. It’s contemporariness crossing path with the past so that art lovers could absorb themselves in the contours that join the two.

Babar Moghul dares art lovers to enter the world that haunts him. It’s a world of big columns, haze and an airiness that is psychedelic, for want of a better word.

Paul Mehdi Rizvi reinvents the wheels-within-wheels concept (or frames-within-frames) by decorating them and imparting them a glittery touch. So what you see is what you don’t get. Interesting!

Omar Farid with his ‘Elementa’ series (acrylic on paper) draws a space that his heart leads him into. His paintings bring to mind the word ‘synecdoche’. This means the parts represent the whole or the whole can be seen through the different parts the artist has drawn, making the form and content mutually reinforcing. And his colours are more animated than his lines.

The exhibition, which has been organised to mark the opening of the Alliance Francaise Library, will remain open this month. 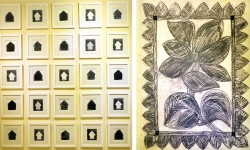 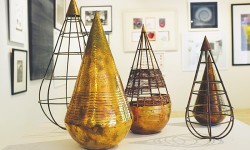 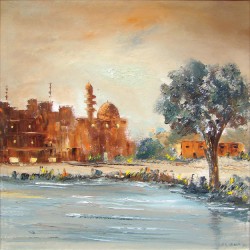