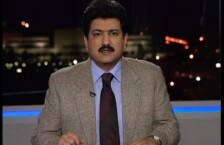 NEW DELHI: Former Indian External Affairs Minister Yashwant Sinha has urged the Government of Pakistan to provide full protection to Geo News senior anchor Hamid Mir, who received bullet injuries in an attack in Karachi last week. “It would be unfortunate if any harm comes to Hamid Mir or Geo TV on your watch,” Sinha said in a letter to Prime Minister Nawaz Sharif, Times of India reported.

Describing Mir as a “fair and fearless journalist”, Sinha said he was at the “forefront of the revival of courageous journalism in Pakistan.” “Hamid Mir has alleged he was under threat both from the state and non-state actors and that elements in ISI may have had a hand in this attack.”

Sinha also described as a “vindictive and retrograde step” the decision by the ISI and Pak Defence Ministry to withdraw Geo TV’s licence. On Thursday, Mir issued his first statement after the attack, saying, “I had been facing threats from both state and non-state actors, but some developments in the recent past convinced me to inform my colleagues about the elements who could most likely try to kill me.” He went on to allege that the ISI was angry because of his coverage of Balochistan issue and the criticism of the intelligence agency. “State agencies often use the name of non-state actors to threaten journalists so as to prevent them from speaking or writing the truth,” his statement said. Sinha’s letter though is likely to fan flames of conspiracy in Pakistan. Just this week, another Pakistani journalist, Imtiaz Alam, quit his TV show and splashed his resignation letter in Jang, a Geo publication. Alam also shared his resignation letter with an Indian newspaper, for which he was accused of conniving with the Indians.