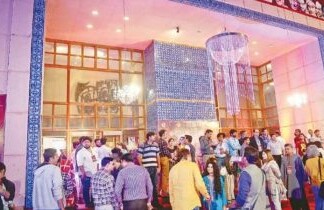 The festival was presented by the Arts Council of Pakistan, Karachi with the collaboration of Sindh Cultural Department. The ceremony was attended by Sindh Secretary Culture Ghulam Akber Laghari and many other social and cultural personalities.

On the accession, Arts Council of Pakistan President Muhammad Ahmed Shah said that the third Sindh Theater Festival was very successful. Initially, we planned for 18 plays but people took all the passes in first two days thus we decided the stage two shows every day to accommodate people and here we are ending with 36 plays of the festival.

“The Arts Council of Pakistan continued this kind of activities, it is the only the Theater Festival that was shown free to people” he added. On the occasion, he announced 11th International Urdu Conference that will start on November 22. He said that this become possible only with the help of Sindh Cultural Department, we have paid to all the artists and the directors.  President Muhammad Ahmed Shah presented a bouquet to Secretary Hulam Akber Laghari and MPA Qasim Soomro where the secretary presented an Ajrak to Muhammad Ahmed Shah and Qasim Soomro. On the last day of the festival, a play ‘Aise Hi Chalta Hai’ staged at Arts Council of Pakistan. The play was written by Krishan Chandra and presented with the least touch and directed by Uzma Sabeen. The play was a criticism on the social behaviour and social responsibilities of the people of Pakistan.

The play was a general reflection of our society where everyone is supposed to criticize the government but no one is ready to help the sufferers. On the last day of the festival, two plays were staged to accommodate the audience.