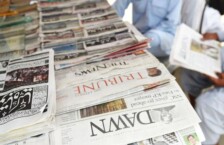 Karachi: The Sindh cabinet, which met here late last week under Chief Minister Syed Murad Ali Shah, decided to withdraw the three per cent Sindh Sales Tax (SST) levied by the provincial bureau of revenue on advertisements in newspapers and periodicals, as well as their web editions.

The decision was taken after a delegation of the All Pakistan Newspapers Society (APNS) met the CM and told him of the grave financial crisis the newspaper industry was in.

Mr Shah was told that the government had not cleared the outstanding dues of the newspapers, and the imposition of SST would aggravate the situation.

Following an assurance by Mr Shah, the cabinet meeting decided to do away with the newly imposed sales tax.