‘Sindh has witnessed the rise and fall of many civilisations’ 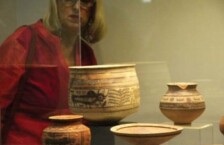 KHAIRPUR: A three-day international conference titled ‘Sindh: history and culture’ organised by the Shah Abdul Latif University in Khairpur opened on Monday on the premises of the university.

In collaboration with The National Institute of Historical & Cultural Research, Centre of Excellence, Quaid-i-Azam University, Islamabad, and the Higher Education Commission (HEC), the conference saw different speakers highlighting the importance of the province in a historical and cultural context.

Prof Dr Javed Ashraf, vice chancellor of the Quaid-i-Azam University, Islamabad, inaugurated the conference as the chief guest. He referred to Sindh as the land of hospitality with a rich historical and cultural heritage. According to him, the Sufi saints of Sindh propagated the ideals of peace, love, affection and tolerance.

The province enjoys thousands of years of history and has witnessed the rise and fall of many civilisations. The most important of them is the Indus Valley Civilisation.

Dr Ashraf appreciated the role of the HEC in uplifting the social sciences and humanities areas of study in Pakistan.

Prof Dr Parveen Shah, vice chancellor of Salu, said that history is considered to be a valuable asset for any nation and should be preserved at all cost. Great nations always move towards the future in the light of their glorious past. According to her, those who ignore history are like trees without roots, which only remain dry logs and bear no green leaves or fruit.

As sunlight is essential for livelihood, in the same way culture is necessary for human beings to decorate their lives. For her, Sindh’s soil is witness to a magnificent history, has amazing archaeological evidence and a colourful culture; it enjoys a vital place among the world civilisations.

Dr Shah said that it is evident from the archaeological, historical and cultural remains of Sindh that since pre-historic times the people of this land have remained cordially involved in diminishing poverty, and have displayed hatred for violence and domination.

She remarked that Sindhi culture is composed of love, non-violence, self-determination and co-existence. It is the need of the hour to promote and propagate these cultural characteristics amongst society so as to create unity and peace. Dr Shah also announced the need to establish an institute of history to conduct research on history, civilisation, cultures of the world, especially with regards to Sindh.

Dr Mohammad Mahmudul Islam, professor at the department of Urdu, University of Dhaka, presented his paper ‘Collaboration of the Sufi saints in controlling the state power of the British in Sindh’. He remarked that the British pursued a similarly pragmatic policy designed to secure maximum cooperation from Muslims in the administration of large territories where European personnel and financial resources were inadequate.

According to Dr Islam, Sufis rather than the Ulema established themselves as the main source of religious leadership for local Muslims.

Dr Fakhar Bilal from the Royal Holloway, University of London, presented his paper titled ‘Mushroom growth of madressahs in Pakistan: A patron-client relationship in urban Sindh’. He said that the word ‘madrassa’ generates a complex, negative image and has aroused the curiosity of scholars among the regional and international community, especially since 9/11.

A madressah is considered, he added, as an institution that preaches hatred and breeds violence and extremism. He stressed the need for local chieftains and the government to modernise this institution.

He spoke about the necessity to revisit neglected areas of history with the help of joint ventures. For him, it is the responsibility of the historian to embark upon research on topics such as Moenjodaro’s trade route, Sindh’s separation from Bombay as well as Sindh’s role in the Pakistan Movement.

Prof Shah lamented how the sacrifices rendered by Sooriah Badshah against British imperialism have been forgotten. The Movement for the Restoration of Democracy (MRD) is also neglected because this movement was Sindh-centric. According to him, the leftist movement in Sindh was very active when Sajjad Zaheer came from India.

He went on to discuss how the Indus is the backbone of the economy of Sindh which is capable of fertilising vast tracks of land.

Prof Dr Mohammad Yousuf Khushk, secretary of the conference said that Sindh has remained the hub of economic activities and exported good cloth quality to the world.

He added that the province has given protection to migratory birds.

Sindh is the land of Sufi saints, he reiterated. Their ideals revolve around interfaith harmony. He quoted the example of Udero Lal a Hindu Sufi saint who has both Muslim and Hindu followers. Other Sufi saints like Hazrat Shah Abdul Latif Bhitai, Sachal Sarmast, Bedil, Bekas and Shah Inayat also contributed to the cause of humanity.

Dr Fatima Hassan presented her paper on Sindh’s culture and society in Shah Latif’s Poetry. Latif’s poetry which is compiled in Shah jo Risalo in the form of 29 Chapters (surs) takes into its fold many local folktales. These characters present their profession, substance, attitudes, hierarchy and relationship. Dr Hassan said that these characters reveal an alternative way to exploring the cultural history of Sindh.

Dr Manzoor Ali Veesrio presented his paper titled ‘Shaikh Ayaz: poet of humanity, peace and love’. He called Ayaz the immortal poet of Sindh who has earned a high place in literary circles all over the country.

Ayaz is a poet of love and rebellion as well as a great humanist, he said. Ayaz believed in the transformation of society on the basis of social equilibrium, religious tolerance, humanism and peaceful co-existence.

The inaugural session was attended by deans of various departments, directors, chairpersons and a galaxy of scholars were also in attendance.