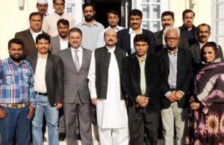 KARACHI: Sindh Chief Minister Syed Qaim Ali Shah had a meeting with newly elected office-bearers of Karachi Press Club (KPC), who called on him at Chief Minister House, under leadership of Imtiaz Khan Farhan, the President of KPC.

The chief minister congratulated the newly elected body and said that KPC was the biggest Press Club of Pakistan and journalists of Karachi were enlightened, progressive and liberal who had always projected the truth and right aspect together with supporting the mission of human rights in the Pakistan. Shah added that the press and media men had always faced difficulties, pressures and hardships but they always voiced for issues confronting to nation and people.

On the occasion, the chief minister announced special grant of Rs4 million for KPC and assured that funds required for the development in Journalists Housing Society at Hawksbay would be released and the work would be completed soon.

Newly elected President of KPC Imtiaz Khan Farhan thanked the chief minister Sindh for inviting newly elected body at the Chief Minister House
and extended invitation for CM to visit KPC. He added that the journalists of Karachi were allotted 166 plots in its first tenure of PPP regime and present elected government under the leadership of CM Sindh had also issued 467 challans of plots to members of KPC. He said that the CM had approved funds worth Rs100 million for development works out of which Rs 50 million were released and another Rs five million were yet to be released.

The CM assured the journalists that all issues would be resolved, and on the recommendation of Sindh Information Minister Sharjeel Inam Memon, the CM Sindh announced foundation of Coordination Committee. 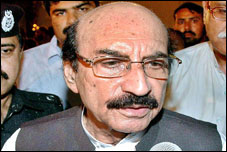 Rape of minor Hindu girl taken up with Sindh CM