Similar heatwave may scorch Pakistan in 2016 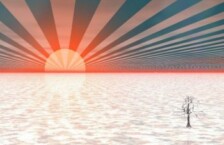 ISLAMABAD: A parliamentary panel on Tuesday was informed that there is a 90% chance of another heatwave scorching Pakistan next year.

The NA Standing Committee on Climate Change was informed of the probability by the Climate Change Ministry’s Secretary Arif Ahmed Khan. This was in response to member Imran Zafar Laghari’s allegation that the government was not informed (by the ministry) well in advance of the weather event.

Laghari said that it was also the responsibility of the Ministry of Climate Change to issue early warning about the severe heatwave. The heatwave is said to have claimed more than 1,000 lives this year in Karachi and some parts of Sindh. In response to this Khan replied that Pakistan was in the list of countries vulnerable to climate change. Many such extreme weather events were expected to hit the country.

Read: Heatwave volunteerism: These images will restore your faith in Karachi

He shared that international scientific studies on climate change state a country experiencing severe weather events will face the same every year with increasing intensity. He said while it might not hit Karachi, the heatwave could be experienced by any city like Lahore, Rawalpindi, Gujaranwala etc.

“This time I am informing the departments concerned well before time. Therefore they have a year to take precautionary measures to prevent many deaths,” he said.

Later he gave a detailed presentation on the climate change and its impact on Pakistan to the members of the National Assembly. He highlighted that around 50% of the population and 22% of the area in Pakistan are at high risk of being affected. He said that Pakistan stands to lose Rs1 billion daily due to climate change affecting crops and health of the people.

“If we sum up the total amount per year then it means Pakistan faces a loss of Rs365 billion yearly. This is a huge amount that could easily be saved through proper planning and implementation,” he said.

Later the NA Standing Committee on Climate Change agreed to draft a legislation in which cutting down trees would be a legal offence.

Meanwhile the first spell of monsoon rainfall has lashed the upper parts of Punjab. Pakistan Meteorological Department (PMD) has warned that the next 48 hours are critical for Lahore, Gujaranwala, Sialkot, Rawalpindi, DG Khan, Islamabad and Kashmir. There is a chance of heavy rain which can generate urban flooding, which could cause a potential emergency.