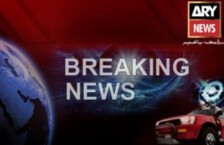 ISLAMABAD: The Shuhada Foundation of Pakistan Trust (SFPT) of Lal Masjid has filed an application with the Islamabad High Court (IHC) against private TV channel ARY for what it called breaking a false news through its bureau chief on Monday in which it was claimed that one Hafiz Ehtisham of SFPT had claimed responsibility for attacking the Islamabad district courts.

The SFPT filed a civil miscellaneous (CM) application in its already pending petition against the TV channels for telecasting programmes against the judiciary and the armed forces.

In the main petition, the SFPT while impleading anchor Mubashar as respondent prayed to the court to direct the regulatory bodies to take action against the maligning of judiciary and the armed forces.

The petition said this news had been telecast falsely and vindictively to create a wrong impression that the armed attack was on the late Additional District and Session Judge Rafaqat Awan for not accepting the application of Haroon Rashid to register an FIR against Pervez Musharraf. That was the order passed on April 28, 2013 about 11 months back and later the IHC had passed an order to file an FIR which was thus registered and the trial was being conducted by another Additional Session Judge Wajid Ali. That matter was an old story and the petitioner or the Lal Masjid management had no grudge, the petition said.

Twitter abuzz with reaction to suspension of Sharifs’ sentences