KARACHI: Recently, a version of Allama Iqbal’s poem Shikwa was presented in a Coke Studio episode. It did not go down well with quite a few lovers of poetry and music. It may have also had its takers. But artist Sobia Ahmed’s take on the poem in an exhibition of her works titled, yes, you’ve guessed, Shikwa Jawab-i-Shikwa that’s under way at the Chawkandi Art Gallery, is an absorbing work of imagination.

The reason for the show being absorbing is not that easy to understand. Sobia has used the poem which is a dialogue between man and God. The dialogue carries a range of arguments in which first he complains to the Almighty about Muslims’ disappointment with the way things have unfolded in their lives, to which He replies that it’s them [Muslims] who have veered away from the righteous path. Sobia, through her paintings, places things in a contemporary setting with a keen sense of history. She is clearly disturbed by the blood and gore that have had a terrible affect on society both in recent times and in the past. The diptych ‘Then and Now’ (gouache, gold leaf and thread on wasli) is indicative of that strand of thought.

What the artist does in a subtle manner, though, is to pick another of Iqbal’s oft-used metaphors that his readers seldom pay attention to — the metaphor of the crow. In the series ‘Sacredness of the Crow’ (gouache and gold leaf on wasli) she makes the bird represent a sanctified state whereas it’s supposed to have replaced a couple of other birds, such as the eagle, in Iqbal’s poetry (zaghon ke tasarruf mein uqaabon ke nashaiman — crows have taken over eagles’ nests). This means that things have gone doubly wrong, where even the crows are treated as sacred creatures. However, the artist could be creating another metaphor here: of hope … after things have gone too awry.

The exhibition concludes on Sept 12. 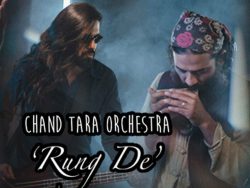 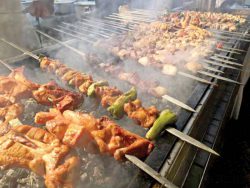 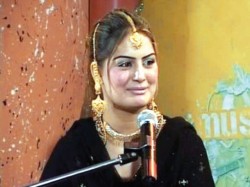