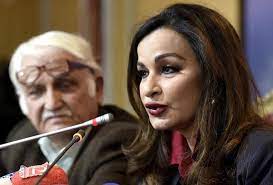 “This is the first time that something like this has happened in the history of Pakistan as it was not even done during the martial law era,” she said while commenting on the closure of the press gallery for the journalists.

The senator questioned that why the government was feeling threatened by journalists. “The joint session was attended by diplomats and ambassadors of different countries; what message is the government sending internationally? We strongly condemn this move,” she said.

Expressing her support for the protesting journalists outside the Parliament, the PPP parliamentary leader said the government was on a collision course with democracy as all independent institutions were being challenged or dismantled. “From the constitutional ones to media freedoms, all that we fought so hard for are being rolled back by this regime, seeking to silence dissent to its draconian path,” she said.

She said all of civil society, journalist organizations, and political parties have rejected the PMDA but the government still continues to ignore the voice of people to push ahead a law it wants to keep secret from the parliament. “Why the cloak and dagger? Why has the draft not been shared with the Parliamentary committee?” she asked.

She said they repealed all the ordinances regarding media censorship, whether they were introduced by Ayub Khan or Zia-ul-Haq. “This is why the government is not bringing this issue on the Parliament floor because they know that we will repeal the PMDA bill and they are scared,” she said.

She said the PTI government wanted to take Pakistan back into a dark era but we will not let them do this. “Media regulatory laws need to be made in collaboration with key stakeholders and journalist institutions, otherwise they have no meaning,” she said.

She said our journalists are protesting against the PMDA, a bill that has not been submitted to the Parliament floor and has been categorically rejected by key stakeholders. “Why is there such a lack of transparency regarding this bill?” she questioned.

Senator Sherry Rehman said this was not the first time that the PTI was doing this, they have been trying to control the media since the time they came into power in 2018. “The PMDA is yet another draconian attempt to gag the media in unprecedented ways and is akin to the censorship seen during the dictatorial regime of Zia-ul-Haq, undoing the democratic process that elected the PTI into government in the first place.”

She said freedom of speech and press are fundamental human rights. Not only does the PMDA infringe on these rights but is also undemocratic and unconstitutional as it circumvents articles 18, 19 and 19-A of the Constitution of the Islamic Republic of Pakistan. “The PTI government has a pattern of exercising authoritarian leadership and is using PMDA to bypass criticism of its otherwise incompetent and corrupt government,” she added.

She said the PTI government is so scared of dissent that they don’t realize that freedom of press leads to competitive, high-quality journalism which directly aids the democratic process. “If anything, Pakistan needs reforms that promote freedom of speech, freedom of press and puts checks and balances in place to prevent the PEMRA from exercising abuse of power as it has often done in the past,” she said.

The senator said the PPP has spent decades fighting such laws; it will not stand by and watch while such neo-fascist tools are rolled out. “Telling truth to the powerful is not a crime. We categorically oppose this fascist bill and demand that the PMDA is debated on the Parliament floor,” she said.