Sharmeen Obaid-Chinoy a graduate of six-week journalism training programme organised by Pakistan Press Foundation (PPF) won her second Academy Award on 28th February for her film ‘A Girl in the River: The Price of Forgiveness’ in the category of Best Documentary (Short Subject).

The film is about a 19-year-old Pakistani girl who survives an attempted honour killing for marrying a man without her family’s approval. In 2012 Chinoy won first Oscar for `Saving Face’, a documentary on women who suffer acid attacks.

Pakistani Prime Minister Sharif who had earlier met Chinoy and pledged to bring legislation to end honour killing said his government was in the process of pushing a law to stop the killings “Women like Ms Sharmeen Obaid-Chinoy are not only a pride for the Pakistani nation but are also a significant source of contribution towards the march of civilisation in the world,” he said in a statement.

More than 500 men and women died in honour killings in 2015, according to the Human Rights Commission of Pakistan (HRCP).Most were never prosecuted. 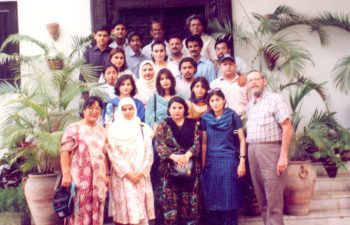 Her passion of journalism and social issues was evident from the very start when she distinguished herself at the six-week journalism training programme organised by PPF in 1998. The course was taught by senior American journalist Arnold Zeitlin, who conducted a series of trainings in Pakistan as a Knight Fellow attached to PPF. Recalling her student Zeitlin said “ I’d like to say I taught her all she knows, but the reality is that I have learned a great deal from her. She is a remarkable talent.”