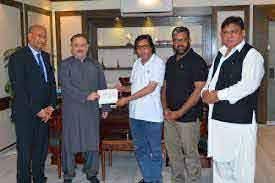 The minister, while speaking at the occasion, said that the annual grant would help in the welfare of journalists and improving facilities in the club. Issue of allotting plots to the remaining members of the press club would also be resolved soon, he added.

He said that Justice retired Rashid A. Rizvi, a person of excellent reputation, has been selected as the chairman of the commission. He maintained that the establishment of the commission would provide protection to journalists and media workers.

The minister further said that the PPP Sindh government was focused on improving the infrastructure of the city of Karachi and major projects have been completed in the sectors of transport, municipal services, health and education while work on several projects was in progress.

In the public transport sector, People’s Bus Service, Orange Line, Electric Bus Service have been started and BRT Red Line project would be completed in the next two years while work on Yellow Line will start soon, Memon informed.