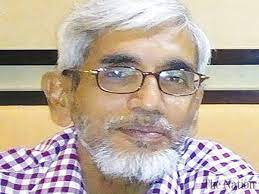 A passionate cricket writer Khalid was hospitalized after suffering a brain hemorrhage over two weeks of ago. Khalid was senior member of Karachi Press Club and Karachi Union of Journalists. He was 58 and left behind a widow and four daughters to mourn his death.

Late Khalid extensively covered domestic and international cricket at home. His last international assignment was in Rawalpindi where he flew to cover Pakistan Vs New Zealand ODI series which was unfortunately did not take place.

Late Khalid was an authority on domestic first class cricket which he covered comprehensively for decades.

He started his career by contributing for famous monthly cricket magazine The Cricketer and later switched to daily journalism the news soon its launch in 1990. He later joined Dawn over a decade.

Khalid was a popular reporter at the National Stadium Karachi Press Box. His death was a great loss to sports journalism in Pakistan. May Allah grant him the highest place in Jannah