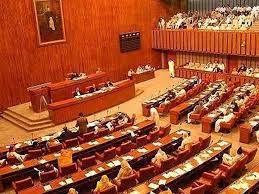 ISLAMABAD: A meeting of the Senate Standing Committee on Information and Broadcasting on Wednesday sought the record of channel ratings and advertisements issued to TV channels.

The meeting was chaired by Senator Faisal Javed in which the committee observed that government advertisements had been used to influence the editorial policies of media houses. According to the data from 2013 to 2018, there is a contradiction in the policy.

Federal Minister for Information Marriyum Aurangzeb said that the government is amending the PEMRA rules.

In the past, the advertisements of non-paying media houses were not stopped nor were they linked to the payment of journalists’ salaries, said the minister.

She said law is being brought regarding workers’ salaries and contracts. She further informed the committee that the then information minister Fawad Chaudhry changed the category of channels during his tenure. In 2019, after the decision of the Supreme Court, the channels were rated, whereas, advertisements were given in A, B, and C categories, said Marriyum.

Prior to this classification, the PID’s advertising system was also transparent, she claimed. She said channels are rated according to programmes and time. Transparency in advertisements was ensured, no discrimination against any channel. Advertisements were also issued on the completion of 70 years of Pakistan after 2013, she said.

She said the government believes in freedom of the press. In the past, journalists were abducted and tortured. No such incident has taken place in our tenures, she added. The committee was briefed by the Ministry of Information on the amount spent on advertisements issued by the government to the electronic and print media from 2008 to 2013, 2013 to 2018, and 2018 to 2022, and details of payment procedures.

After approval of advertisements by federal government agencies, the Press Information Department releases advertisements as per the requirements of the agency, PIO Syed Mubashir Hassan said while adding that these advertisements are issued directly to the publications from the PID.

Transparency in the issuance and payment of advertisements is ensured by the government and the Ministry of Information, Mubashir added.

The committee was also informed about the PTV coverage for all the provincial governments including Gilgit-Baltistan and Azad Jammu and Kashmir.

The Chairman of the committee also stressed the need for implementation of the journalist protection bill and said that its implementation should be within the purview of the Information Ministry.

However, Marriyum Aurangzeb said that work on the bill will be completed soon.