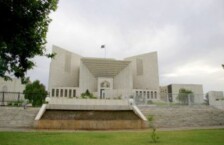 A three-judge Supreme Court, bench headed by Justice Asif Saeed Khosa, also asked Attorney General Salman Aslam Butt to assist the court on a question raised in the petition to determine the jurisdiction of the Supreme Court over the territory of GB. The date of the next hearing will be decided later.

The ATC had sentenced Mr Rahman over the airing of the May 14 episode of Dr Shaista Lodhi’s morning show, Utho Jago Pakistan, where the allegedly inappropriate use of a piece of qawwali prompted rival media groups to initiate a smear campaign against the Geo network, accusing it of committing blasphemy.

The petition before the apex court, moved by senior counsel Khawaja Haris Ahmed on behalf of Mr Rahman, asked the court to suspend the ATC’s conviction and stay any warrant of arrest, attachment or confiscation of passport in any territory that was part of the territory of Pakistan.

In the volatile environment after the programme aired, 71 FIRs were registered in nearly all major cities of Pakistan, including nine that were filed in GB, under blasphemy.

Thus, if GB was a part of Pakistan, then the jurisdiction of the Supreme Court, especially under Article 184(3) of the Constitution, also extended to the territories, courts, authorities and persons functioning and/or residing in GB as well, the petition pleaded.

GB is considered to be a part of Pakistan even by the Supreme Appellate Court of Gilgit-Baltistan and that the courts in GB were considered as courts in Pakistan and the judgments passed by the apex court were also binding on all courts in the territory, the petition pleaded.

Moreover, the petition argued, the offences allegedly committed by Mr Rehman fell exclusively within the domain of the Pemra Ordinance 2002, by virtue of over-riding effect given to the provisions in the ordinance.

Meanwhile, a different bench, headed by Justice Ejaz Afzal, on Wednesday ordered Inspector General of Islamabad Police Tahir Alam Khan on Wednesday to appear before it in the second week of January next year. The summons is with reference to the matter of banners that went up in the Red Zone as well as different parts of the capital on the night of May 22.

Sponsored by an unknown organisation calling itself the ‘Farzand-i-Islam’, the banners levelled serious allegations against Justice Jawwad S. Khawaja.

On Wednesday, the court criticised Aabpara Station House Officer (SHO) Khalid Awan for his failure to apprehend the culprits behind the banners.

The court also rejected a police report, which claimed that freelance journalist Mohammad Rashid was behind the banners. The police report also claimed that Rashid had put up banners also against anchorperson Hamid Mir in the past.

Rashid’s email, Facebook and bank accounts had also been examined, but nothing significant turned up, the police report said, adding that a trial court was also conducting proceedings against Rashid and his three accomplices.

The apex court, however, reprimanded the police officer for presenting “false reports” and ordered the Islamabad IGP to appear in person and submit a comprehensive report on the matter.