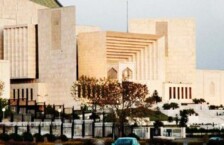 ISLAMABAD: Rejecting written apologies of Salman Iqbal, the chief executive of a private television network, and anchorperson Mubashir Lucman, the Supreme Court ordered the attorney general on Thursday to make arrangements for screening “scandalous and defamatory programmes” aired by the channel against the judiciary.

A three-judge bench, headed by Justice Ejaz Afzal, had taken up a contempt case against Mr Iqbal and Mr Lucman for airing a talk show on ARY’s ‘Khara Such’ programme on May 29 last year.

In the programme, Mr Lucman had levelled a number of defamatory allegations against former chief justice Jawwad S. Khawaja – his close relationship with Mir Shakeelur Rehman, the owner of Geo TV network, and the sale of a property in Lahore to the Punjab government by the wife of the judge.

The court had on Jan 5 indicted Mr Iqbal and Mr Lucman on contempt charges. The matter had been brought to the notice of the apex court by Advocate Taufeeq Asif.
Orders screening of scandalous programmes aired by the channel against judiciary

“You should have contested the case instead of tendering the apology,” observed Justice Ijaz Chaudhry, a member of the bench, while pointing to Advocate Anwar Mansoor, the counsel for Salman Iqbal.

“Recalling the programme, don’t you think a judge of this court was ridiculed,” Justice Afzal regretted. “If we examine it, by all means the statements made in the programmes against the judge were derogatory,” he said.

The counsel explained that his client never intended to scandalise the judiciary and whatever happened was unintentional. Mr Iqbal admitted that certain utterances were made against the judiciary, the counsel said. But he explained that being CEO of five different channels of ARY, it was very difficult for Mr Iqbal to control or monitor the contents of each and every programme.

Mr Mansoor said his client had told Mr Lucman not to repeat the same mistake.

But the court asked the counsel to substantiate in black and white that the anchorperson had been censured.

The court asked Attorney General Salman Aslam Butt to make arrangements on Oct 13 to screen all the slanderous talk shows of Mr Lucman aired after May 29.

DEFAMATORY BANNERS: Refe­rring to the brazen display of defamatory and critical banners against the former chief justice in Islamabad, Deputy Attorney General Sajid Ilyas Bhatti informed the court that the capital police had filed two challans against 10 of the 12 accused in the relevant court, even though the accused Mr Salman and Mr Lucman had sought pre-arrest bail from courts.

Except for Mohammad Rashid, the principal accused, and painters Mohammad Nasir and Mohammad Shafique Butt, the other seven accused work for ARY TV in different positions.

The defamatory banners had popped up in the red zone area and other parts of Islamabad on the night of May 22 last year. Sponsored by an unknown organisation, “Farzand-i-Islam”, the banners made serious allegations against the former chief justice.

A report submitted on behalf of the Additional Inspector General of Police (operations), Islamabad, Mohammad Suleman, said a special investigation team (SIT) had investigated the case minutely, recorded statements of the persons concerned, arrested the accused and filed challans against them.

According to the report, the investigations suggested that abetment had been found in the case of Mr Lucman, after which attempts were made to arrest the anchorperson but he managed to get an interim bail from a court.

The SIT concluded that all the accused, except the abettors involved in placing the banners, had been arrested and sent to judicial custody. During investigations, the report said, no evidence came on record to substantiate the fact that any other person was also involved other than the 12 accused.

As desired by the apex court, a discreet probe had also been carried out during which it transpired that no objectionable banners were displayed within the red zone, though they were placed outside it.

But the court, on the objection of Advocate Sheikh Ehsanuddin that police had failed to arrest the mastermind behind the episode, ordered that the police report be provided to the counsel so that he could file his objections after going through it.