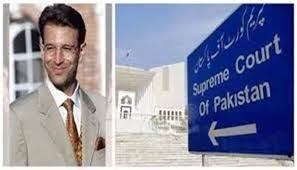 ISLAMABAD: By a majority of two to one, the Supreme Court acquitted on Thursday Ahmed Omer Saeed Sheikh, the principal accused in murder of Wall Street Journal’s bureau chief for South Asia Daniel Pearl, by extending the benefit of the doubt to him.

Headed by Justice Mushir Alam, a three-judge Supreme Court bench also comprising Justice Sardar Tariq Masood and Justice Yahya Afridi ordered that Mr Sheikh, Fahad Naseem Ahmed, Syed Salman Saqib and Shaikh Muhammad Adil be set free forthwith, if not required to be detained in connection with any other case. The detailed reasons for the judgement will come later.

In his dissenting note, however, Justice Afridi partially allowed the appeals against acquittal with regard to conviction of Mr Sheikh and Mr Naseem under Sections 365-A and Section 120-B of the Pakistan Penal Code (PPC) and Section 7 of the Anti-Terrorism Act of 1997 and sentencing to life imprisonment on each count.

The apex court was seized with a set of appeals instituted by the Sindh government through Prosecutor General Dr Fiaz Shah, the parents of the slain journalist, namely Ruth Pearl and Judea Pearl, through senior counsel Faisal Siddiqui as well as Mr Sheikh, the principal accused in the murder case through Advocate Mehmood A. Sheikh.

The appeals challenged the April 2, 2020 judgement of the Sindh High Court (SHC) that overturned Mr Sheikh’s conviction in the alleged kidnapping and killing of Daniel Pearl.

Through its April 2 order the high court had modified the sentence handed down to Mr Sheikh, to seven years’ rigorous imprisonment and a fine of Rs2 million. Mr Sheikh was believed to be the mastermind behind the alleged kidnapping and killing of the American journalist.

Mr Sheikh was accused of kidnapping Mr Pearl in Karachi in Jan 2002 while he was carrying out research on religious extremism in the city. Later a graphic video showing his decapitation was delivered to the US consulate after a month of his abduction.

Mr Sheikh was arrested in 2002 and sentenced to death by the trial court.

Section 365-A of the PPC deals with the kidnapping or abduction for extorting property and valuable security, and provides for punishment with death or imprisonment for life or rigorous imprisonment for a term which could be extended to 14 years but not be less than seven years.

Section 120-B explains that whosoever is involved in a criminal conspiracy to commit an offence punishable with death, imprisonment for life or rigorous imprisonment for a term of two years or upwards, shall be punished in the same manner as if (s)he had abetted such offence.

Section 120-B (2) also says that whosoever is involved in a criminal conspiracy to commit an offence shall be punished with imprisonment of either description for a term not exceeding six months or fine or both.

Section 7 of the ATA suggests punishment for acts of terrorism with imprisonment of 10 years or more, including the offences of kidnapping for ransom and hijacking, besides possible forfeiture of property.

Justice Afridi ordered that all the sentences passed against both the convicts would be extended to them. To the extent of Mr Saqib and Mr Adil, the judge maintained their acquittal by the high court on all the charges and said they would be released from jail forthwith if not required to be detained in any other case.

Justice Afridi, however, dismissed the appeal of the principal accused, Mr Sheikh.

Soon after the judgement, the parents of the 38-year-old slain journalist issued a statement stating that the Pearl family was in “complete shock” by the majority decision of the Supreme Court to acquit and release Ahmed Omer Sheikh and the other accused persons “who kidnapped and killed Daniel Pearl”.

“Today’s decision is a complete travesty of justice and the release of these killers puts in danger journalists everywhere and the people of Pakistan,” the statement said and urged the US government to take all necessary actions under the law to correct this injustice.

“We also hope that the Pakistani authorities will take all necessary steps to rectify this travesty of justice,” the statement said, adding that no amount of injustice would “defeat our resolve to fight for justice for Daniel Pearl”.

Meanwhile, a different bench of the apex court granted leave to appeal to the Sindh government against the Dec 24, 2020 SHC decision to release Mr Sheikh and other accused.

The SHC short order had ordered the provincial government to immediately release Mr Sheikh and other accused from the jail forthwith on the receipt of the order since the first and the second preventive detention orders of April 2 and July 1 had expired and they were no longer in the field.

Later, a spokesman for the office of Attorney General for Pakistan said that the federal government was in contact and fully engaged with the government of Sindh in respect to the judgement in the Pearl case. It is confirmed that a petition seeking review and recall of the order of acquittal passed by the Supreme Court will be filed at the earliest. The federal government was extending full support to the provincial government in this matter and all legal steps were being taken in this regard, he said.

In a related development, the White House expressed outrage over the Supreme Court’s judgement, adds Reuters.

At her daily briefing, Ms Psaki called on the Pakistani government to quickly review legal options including letting the United States prosecute those acquitted.

Newspaper: Dawn, The News, The Nation, The Express Tribune