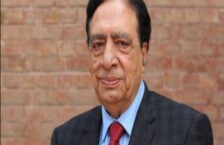 ISLAMABAD – The Supreme Court on Thursday declared appointment of Atta-ul-Haq Qasmi as Managing Director and Chairman of Pakistan Television as illegal and without any lawful effect.

The top court also ruled that payment of salary, benefits and allowances to Qasmi were unlawful and unauthorised as he was not entitled to such payments and could not retain the same.

According to the top court’s ruling, Qasmi was beneficiary of illegal act, therefore; 50 percent of the Rs197,867,491 will be recovered from him.

Both former federal ministers Pervez Rashid and Ishaq Dar are liable to reimburse 20 percent each on account of ignoring the law and disregarding their duties to confer benefits.

Likewise, the top court ruled that 10 percent of the amount be recovered from former secretary to Prime Minister Fawad Hassan Fawad for failure to act with due diligence in processing the summary for appointment of MD PTV from a person-specific recommendations as opposed to a panel of 3 names as required by the Esta Code.

“These amounts are their liabilities and they must reimburse the same to the PTV. We give them an opportunity to do so voluntarily. However, if they fail to do so within a period of 2 months, the PTV is directed to recover the said amount as per the procedure in practice for the recovery of dues”, the court ruled.

On account of lack of fiduciary behaviour, the top court also declared Qasmi to be ineligible for appointment as a director of any company.

The top court also declared all the administrative orders passed by Qasmi during his tenure to be illegal and void ab-initio.

The top court further directed the federal government to appoint a full-time Managing Director of PTV, in case the position is still vacant, after fulfilling all legal, procedural and codal formalities, strictly in accordance with law and submit the report in this regard within two weeks.  The judgment on illegal appointment of Qasmi in the PTV was reserved on July 12. The 48-page verdict is penned down by Chief Justice Mian Saqib Nisar.

The CJ expressed serious concerns on the bureaucracy for lacking the ability to work independently.

“The alarming negligence of government officials which they tried to justify by stating that they were merely following orders from superiors/political heads shows their lack of ability to withstand pressure and influence from higher officers or political bosses,” the chief justice observed.

It is further observed that each official was trying to shift responsibility from him onto other ministries and divisions in the matter.

“This exercise of shirking responsibility and ignoring the rules has resulted in colossal loss of millions of rupees to the public exchequer and the PTV,” the chief justice observed.

The judgment further observed that public officials, particularly heads of ministries who are elected representatives of people of Pakistan, owe their first and foremost allegiance and loyalty to Pakistan, the Constitution and the law.

“In our view the instant matter is a clear cut case of dictated exercise of direction,” it added.

It came to the court’s notice that blatant irregularities and illegalities existed in Qasmi’s appointment as a Director and the Chairman of PTV and the fixation of his terms and conditions including a handsome salary package along with perks/benefits/allowances.

“It was apparent from the face of the record that there was nepotism and misuse of authority regarding Qasmi’s appointment as Director/MD PTV. Therefore, it was well within the powers of this court to determine the validity of such appointment and fixation of salary etc.”

The chief justice further observed that Qasmi was given an immensely generous salary package together with other perks and benefits.

“On account of complete lack of skill and experience of running a company, the PTV, once a profitable institution, experienced a sharp decline both financially and in its reputation as a major player in the electronic media market. It was burdened with an exorbitant amount of expenses on account of inefficient and inept management”, the verdict read.

The judgment further stated that the apex court had ample powers of exercising suo moto jurisdiction in the instant matter as the public money had been misused through the corrupt practice of nepotism and favouritism by giving excessive salary, perks, privileges and incurring other undue expenses causing loss to the public exchequer.

“When the law is being blatantly flouted by executive at the expense of a national institution promoting public awareness and understanding of events, culture and heritage, and public money is showered on a chosen few as a favour without regard to qualification or merit, it undeniably becomes a matter of public importance.” “The record submitted to the auditors has been verified by the PTV officials and we do not believe that further verification is required,” the chief justice opined.

It further observed that federal government did not consider the criteria prescribed while nominating Qasmi as a Director of PTV.

“The appointment depicts the myopic and stubborn resolve of the federal government to accommodate Qasmi against the said position,” it stated, adding that Qasmi’s appointment as a Director of PTV was made in violation of the prescribed legal criteria and procedure. “It is hereby declared to be illegal.”

“No justification was provided for relaxation of the upper age limit. We find that Rasheed did not have the power or authority to decide and propose (even in consultation with his department) on his own, the name of any particular individual for the post in question. No advertisement was made, no criteria were laid down and no qualifications were taken into account.”

“The discretionary power of appointing a director under Section 183(b) of the Ordinance cannot be reduced to a simple ‘cherry picking’ of Qasmi by the federal government.” In fact, the judgment further observed, the process started and ended with Qasmi’s name, and was therefore person-specific, rendering the exercise colourable and tainted with nepotism and mala fide.

“We are in no manner of doubt that every endeavour was made to turn Qasmi’s appointment into a reality.”

“The federal government not only bypassed the law, but took active steps for appeasement upon which this Court expresses its disapproval and dismay.”

It further observed that no justification had been provided for the special treatment Qasmi was afforded nor had it been explained as to why a chairman was offered a salary package that was more generous than that of an MD whose duties and functions are of a managerial nature while duties of the former are limited to overseeing the working of the board.

“It is incomprehensible as to why such excessive benefits/allowances as mentioned in board resolution 2000 such as office entertainment and entertainment of guests outside office is required for ‘smooth running’ of the company.”