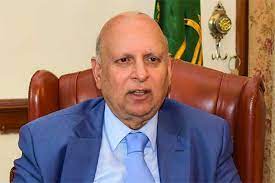 LAHORE: Governor Chaudhry Sarwar says Pakistan’s GSP plus status is under threat as 665 out of 671 European parliamentarian have voted for reconsidering it (the country’s GSP plus status), advising the government to ease confrontation on all fronts to strengthen its case internationally.

Speaking at a dinner hosted for the Pakistan Federal Union of Journalists (PFUJ) delegation at the Governor House, Mr Sarwar said he had maneuvered the GSP plus status for Pakistan in 2013-14 and was now planning a two-week visit to Europe next month to speak to European parliamentarians to retain the status.

Warns of threat to Pakistan’s GSP plus status, economy

“This is a big challenge, but I will use my contacts in the European parliament to help retain Pakistan’s status,” he said.

The governor also asserted that the government needed to reduce confrontations at all levels in the country, including on the issues of media, freedom of press, political parties as well as human and minorities rights.

“The lesser the confrontation, the easier it will be for me to contest Pakistan’s case for retaining the GSP plus status,” Mr Sarwar said.

Since attaining the GSP plus status eight years back, the governor said, the country had earned exports worth around 24 billion Euros during the period.

“If Pakistan lost the GSP plus status, it will be very difficult for country’s economy to sustain this blow,” he said and called it a big challenge for the country.

“We will not repeat our old mistake,” he added.

The governor stressed that Pakistan’s media could play a decisive role in projecting Pakistan’s true stance. He also assured the delegation that he believed in working together, resolving issues through a constructive dialogue and freedom of the press.

He also acknowledged that the media usually played the role of opposition and did constructive criticism, leading the government to do more people-friendly work. He stressed that the media should also balance itself as it would be disastrous for it to take sides.

The governor assured the PFUJ that he would personally sit with media persons’ leaders and discuss the union’s 19 demands and lobby with the government to resolve the issues in an amicable manner.

“I believe that the PFUJ’s genuine demands will be met and there will be no need to hold the country-wide long march [announced a day earlier],” he said.

Counting the major issues, including price-hike and ever-increasing harassment and assault cases against women, the governor said the government must resolve these issues through a dialogue. The governor acknowledged the media workers’ efforts on the front line to create awareness about the coronavirus and protective measures against the disease.