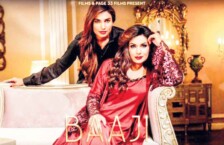 Saqib Malik’s big screen directorial debut, Baaji featuring Meera Jee, Amna Ilyas, Ali Kazmi and Osman Khalid among others, released on June 28, 2019 in Pakistan and beyond. Since then the film, which is running successfully in cinemas for six weeks now, has garnered rave reviews.

The good news is that Baaji, that marks Meera Jee’s return to the big screen, will have a special screening today (August 2) at the Mosaic International South Asian Film Festival (MISAFF) in Mississauga, Canada. Now in its 7th year, the MISAFF kick started on August 1 and will run till August 4, 2019.

“I am thrilled that Baaji is a part of MISAFF. It’s a huge honour that the film will be in competition and up for awards,” said Saqib Malik in a press statement. According to recent reports, actor Ali Kazmi, who plays a prominent role in Baaji, will also be present at the festival.

The 7th edition of Canada’s leading South Asian film festival will showcase eight fiction films, three documentaries, and seven shorts from India, Pakistan, Bangladesh, Italy, the UK and Canada – based on the themes of love, explorations of art and ancestry and comedies on complex relationships among others topics.