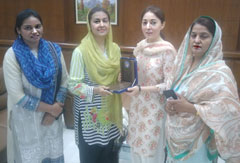 PPF in collaboration with FAFEN is conducting Sindh Assembly’s observation since 2010 under its program Parliament Watch and has been sharing reports of daily proceedings with FAFEN, which issues those reports on daily basis; while monthly and annual reports are produced by FAFEN on the performance of legislators. 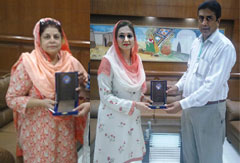 Women legislators appreciated the efforts of FAFEN and PPF for paying tribute to female law makers by presenting to them shields.

According reports the contribution of women lawmakers in enriching the agenda of the Sindh Assembly is not less than the performance of their female colleagues in other provincial assemblies of the country, as they contributed more than 50 percent of the agenda on the floor of the House during the last three and a half years.

FAFEN report further adds that there are only 30 women legislators in the 168-member Sindh Assembly. However, despite their less numerical strength, the women perform equally well or in some instances better than their male lawmakers. During last 30 sessions held between June 2013 and March 2017, women contributed 50% agenda on their own and eight percent in collaboration with their male colleagues.

Shields were presented to the Sindh Assembly members of PPPP, MQM, PML-F, PMLN and PTI.