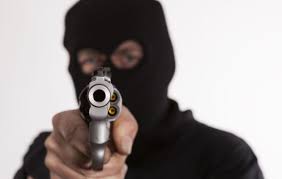 ISLAMABAD: Robbers entered the house of a senior journalist in the early hours of Tuesday and manhandled her, police said.

Five armed men raided the house of Fouzia Shahid in Media Town at about 3am. They reached the bedroom and held the journalist and her husband at gunpoint.

When Ms Shahid shouted, the robbers punched, slapped and kicked her.

They also snatched a mobile phone and gold bangles from her and asked her to accompany them to the first floor of the house. When Ms Shahid resisted, the robbers dragged her from her hair and manhandled her.

As she started shouting, the criminals locked Ms Shahid in a room and went upstairs.

However, her daughter-in-law locked herself in the room and when the culprits failed to open the door, they escaped.

In a statement, PPP chairman and Foreign Minister Bilawal Bhutto-Zardari condemned the incident and directed the police and administration to arrest the culprits and take action against them.

He also asked Interior Minister Rana Sanaullah to take personal interest in the case and ensure the arrest of the culprits. Office-bearers of the National Press Club, including its president Anwar Raza, also condemned manhandling of Ms Shahid and her husband and demanded action against those involved in it.

The robbery in the senior journalist’s house has exposed the police performance as the residents of the twin cities had been left at the mercy of criminals, they said, adding that journalists’ unions would stage countrywide protest if action was not taken against those involved in the incident.

Meanwhile, the Rawalpindi-Islamabad Union of Journalists (RIUJ) also condemned the incident and said growing robberies in Media Town were a matter of concerns for mediapersons. It said police had failed to trace the criminals involved in previous incidents.