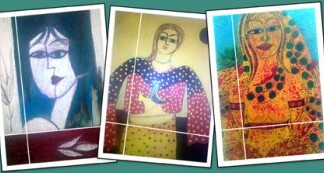 The theme of the 74 paintings on display is derived from the stories of countless women, who are deprived of their rights and dreams by our society. The artist prefers using oil on canvas to portray the nuances and complexities of women’s life in our patriarchal society.

One of her paintings titled ‘Freedom of Women’ touches on the topic of suicide, where a woman is depicting viewing a knife on a chair. It seems the woman wants to get rid of her life of imprisonment.

Khaild in her paintings has used lights colours to express the meaning behind the painting and she sophisticatedly given the feelings of depression with a brush on the figure.

Another painting, ‘Life of a Woman without Freedom’ portrays a lady with a bird sitting on her shoulder. The artist tries to illustrate the emotions of a free woman. A woman who gave up everything, including herself, but in return did not get anything, except restrictions and imprisonment. The bird perhaps is the symbolic representation of the desire to be free from all those restrictions that women in our society face on every stage of their lives. The artist used light colours in the painting, which might be expressing that life without freedom is life without colours.

Similarly, another painting ‘Women, a prisoner of our society’ demonstrates a woman within a prison, sitting with her head bent low. Perhaps a portrayal of women imprisoned within the rituals of our society. The background is dark and sombre, while the faceless woman herself has been painted in light colours – being without a personal identity is what is expected of women.

One of the most radical work by Khalid is ‘Thinking of society for women’, which depicts that women are still tied up in slavery even in the 21st century. Where a woman is obliged to work for the family, household and after fulfilling all that, if she is left with some time and energy, she might concentrate on her own aspirations. Her family members take the decisions for her, without any deliberating.

‘Women Dream’ shows a lady standing in front of a mirror, with a green parrot sitting on her hand. The woman decorated herself with lipstick and other makeup while covering her head with a scarf. She is looking comfortable and relaxed. In the painting, the painter tried to express that every women dreams to live life according to her own wishes.

An untitled painting of a village woman was about the beauty and culture of villages. In the painting the woman is fully decorated with make up and bangles. She has a smile on her lips, and is wearing a heavy designed dress of yellow colour. It is a portrayal of awaited good news, or the arrival of a beloved.

Talking to Daily Times, Khalid said that in our society, women despite facing a number of problems survive by playing a vital role in fulfilling their obligations.

“I tried to capture the women, who are respected and disrespected by men,” she said, adding that she painted the scenes by experiencing the stories of other women.

Khalid further said that women should not only be respected in the society as daughters, sisters, mothers, and wives but as individuals as well. “There should not be any discrimination between the treatment meted out to your own sister and someone else’s sister,” she concluded.