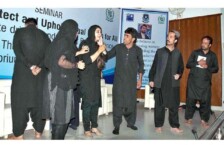 ISLAMABAD: Pakistan is one of the most progressive countries in the world for legislating laws to secure and safeguard the rights of the transgender community.

This was stated by the Federal Minister for Human Rights Shireen Mazari on Thursday as she responded to the statistics shared by the Human Rights Commission of Pakistan (HRCP) earlier over the country’s lack of implementation of transgender laws.

“The HRCP and other non-governmental organizations (NGOs) should upgrade their records and avoid disseminating dubious information demeaning Pakistan’s image around the globe,” Mazari stated while addressing a seminar organized by the Islamabad Capital Territory Police (ICTP) and Rozan titled “Striving to Protect and Uphold Equal Rights for All” a public-private drive to end gender-based violence.

Referring to the implementation of the laws, the federal minister pointed towards the creation of a special ward at the Pakistan Institute of Medical Sciences (PIMS) for people who are transgender and the provision of free medical treatment at every public hospital.

“The health ministry has publicly announced to first distribute health cards to people who are transgender,” she added.

She also contested the data on violence against people who are transgender, stating that violence cases have fallen significantly.

She added that the situation had considerably improved in the Khyber-Pakhtunkhwa, one of the hotbeds for violence against people who are transgender.

Mazari emphasized the need for greater public awareness campaigns at the grassroots level coupled with the assistance of media in publicizing the message for deeper outreach.

“We need to bring a change in our homes and start educating mothers and every member of the household to stand up for their rights, namely women, children and particularly the youth,” she said, adding that it was not a favour, rather it was their fundamental rights as prescribed in the Constitution.

“There is no harm in gathering financial assistance from United Nations’ (UN) bodies working for the cause in Pakistan. UN Women, UNICEF and UNDP are quite supportive and we are also members of the UN and it’s our right to demand funds for women human rights initiatives,” she said.

However, Mazari underscored that the international NGOs funding needs to be limited as they come with their own agendas contradicting and hostile to the indigenous social set up, norms and culture.

“Pakistan is among very few countries allowing minorities with their own laws compatible with their religious customs and faith. Hindu Marriage Law is there whereas Christian Marriage Law and Divorce Law are in the process,” she added.

To curb violence against women, children and the marginalized segments of the society, the federal rights minister said that they had to focus on the implementation of existing laws and formulation of new laws along with massive awareness and change in the mindset prevailing in the society.

State Interior Minister Shehryar Afridi said that the law of the land stands supreme and a sovereign country will never compromise on its principles.

“INGOs should keep this thing in mind that we acknowledge their efforts in supporting the weak and marginalized communities of our society,” he said, adding that INGOs have to bring their programmes in line with the social fabric and prevailing culture, customs and traditions of the country.

“We have facilitated them and if they do not follow then Pakistan will clearly say ‘NO’ to such organizations,” he declared.

Inspector General Aamir Zulfiqar Khan said that there were gaps at different levels for effective implementation and action to safeguard and protect rights for all.

“We have to change the behaviour of not only of policemen, but the entire society towards the most vulnerable and violence-affected masses of our society,” he added.

He conceded that the 250 women police officers in ICT were far below the global averages of 25% to 30% female representation.